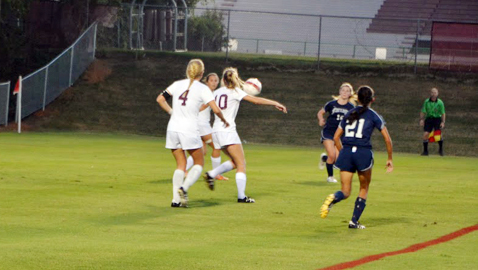 Farragut’s Jordan Fierley (7) blocks a shot from Bearden’s Emily Mayfield in the Lady Admirals 2-1 District 4-AAA victory over the Lady Bulldogs Thursday night at Bruce Allender Field. The win was Farragut’s fifth straight over Bearden since 2011.
Photo by Dan Andrews.

In the tradition-rich Farragut High-Bearden High girls soccer rivalry, it was a pair of high school rookies who stole the show and propelled the Lady Admirals to a 2-1 win over the Lady Bulldogs Thursday night at Bruce Allender Field.

Stepp, who scored both of the Lady Admirals goals, gave Farragut a 1-0 lead in the fifth minute on a breakaway set up by a pass from senior K.C. Ward. Stepp’s second marker came in the 29th minute and was assisted by Tori Hunt.

Stepp’s two goals came on Farragut’s only shots in the opening 40 minutes.

Burt, a Farragut basketball player, who is playing soccer for the first time since she was in eighth grade, stopped nine of those shots.

“We came in knowing that we were tied for third place and we really wanted to win this game,” Burt said. “It was very intense.

“We played great defense and Elise really stepped up for us tonight.”

The only blemish on Burt’s performance on this night came when Taylor Frizen knotted the game at 1-1 with the equalizer in the 13th minute.

“She’s a great keeper,” Bearden coach Ryan Radcliffe said of Burt. “It’s frustrating when you outshoot a team and lose but that’s kind of been the story of our season. It’s heartbreaking for the girls and it’s tough to watch.

“It’s heartbreaking to see these girls give all they have. They gave me all they had in the second half and I can’t ask for anything more than that. We played a great game but we had a couple of lapses. When you play Farragut, you have to play a complete 80-minute game. They played a 100 percent complete game and we played a 98 percent game.”

“Bearden played well,” he said. “This could’ve gone their way. It was a hard-fought battle.

Stepp’s two goals were the first of her high school career. She put in some extra work on breakaway opportunities after she missed a pair earlier this season in a 1-0 loss to Hardin Valley Academy.

“As a team, we’ve been working on breakaways and these were big after I missed those two against Hardin Valley,” she said.