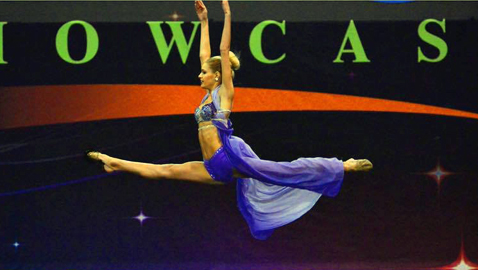 Josie Redmond takes to the air at a national dance competition.

Seventeen-year-old Josie Redmond is preparing for a new life. The Carter High School senior will skip her senior year and join the Joffrey Academy of Dance in New York City. Her mother calls the move a “dream of a lifetime.”

Nikelle Troutt, Josie’s mother, told The Focus that her daughter has been in competitive dance for five or six years. Although Josie has been awarded several scholarships, she chose the nationally recognized Joffrey Academy. Josie was the first graduate of Backstage Dance Company of Knoxville and is working to complete her high school requirements before she leaves for New York on September 13.

Josie’s parents, Scott and Nikelle Troutt, accompanied Josie to New York this summer and toured the Academy. While there Josie took part in the Rockette’s Summer Intense class. Her mother said she had applied to Joffrey while in an Atlanta competition and they had thought it was for a short training program but the Academy invited her to take part in their four-year program.

“It’s an absolute dream of hers, a once in a lifetime opportunity. She’s prepared. It’s a little sooner than we were prepared for but we have faith, trust, and a lot of prayers,” Nikelle said.

“She will be living in a young adult apartment and there’s a 30-minute subway commute every day to class,” she said.

Josie will be a trainee in the Jazz Contemporary Dance Program there. The Strawberry Plains student’s schedule will allow her to come home for Christmas and even graduate with her senior class in May. Nikelle said the family is working out the Carter High School senior year details with the school system.

While at the Academy she will be earning college credits and have classes 9 a.m. until 5 p.m. Monday through Friday.

The cost of the Academy is expensive and Nikelle said the family has been advised to have a fund raiser to help. Her mother said the cost of housing in New York is more expensive than the tuition.

“She’s excited and happy to be on her way to becoming a professional dancer,” she said.