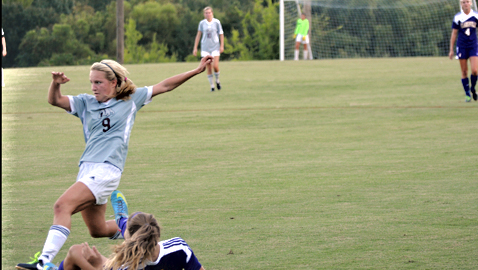 Bearden’s Clarity Voy (9) tangles with Clarksville’s Gybson Roth in Thursday night’s opener of the Bearden Invitational. The Lady Bulldogs and Lady Wildcats played to a 3-3 tie at Bruce Allender Field.

Bearden High School’s young girls soccer team went through some growing pains Thursday night. The Lady Bulldogs, however, did enough to salvage a 3-3 tie against Clarksville in the opening round of the Bearden Invitational.

The Lady Bulldogs, who were playing their first game nearly two weeks, fell behind early but turned up the pressure a bit after a halftime speech from first-year head coach Ryan Radcliffe.

“We played better after his halftime speech,” said sophomore Taylor Frizen, who scored the game-tying goal in the 69th minute.

Bearden last played a full game on Aug. 20 when it dropped a 2-1 District 4-AAA match to Maryville. The Lady Bulldogs then attempted to play Cookeville a short time later only to have inclement weather halt the game early. Bearden (0-1-1) was leading 1-0 when play was stopped due to lightning.

Radcliffe said the long layoff might’ve been a factor but he wasn’t looking to make any excuses for his team’s lackluster play in the first 40 minutes.

“It’s tough when you’re playing your first game in about two weeks, especially with a young team, but we weren’t prepared to compete,” Radcliffe said. “Those were the growing pains.

The Lady Wildcats (3-0-1), who dominated things in the first half, scored the match’s first goal when senior forward Ella Baggett fired the ball past Bearden junior goalkeeper Kay Lee Wentz in the 26th minute.

Baggett would finish the night with a hat trick as she scored all of Clarksville’s goals. Her play impressed Radcliffe.

“Clarksville is a great team and [Baggett] is a great forward,” he said.

Bearden would answer in the 35th minute when Ashley Seltzer scored from 43 yards out on a direct kick to knot the match at 1-1.

The Lady Wildcats would regain the lead just before halftime when Baggett scored her second marker on a breakaway in the 37th minute. Baggett’s second goal came on the counter attack.

Baggett and Clarksville continued to set the tone early in the second half. Baggett made the score 3-1 in the 45th minute.

Bearden pulled to within 3-2 on Seltzer’s second marker. The goal, which came in the 66th minute, was assisted by Casey Riemer.

The Lady Bulldogs pulled even when Frizen bent a goal around the near goalpost and past Clarksville netminder Melia Correa with just over 11 minutes remaining.

“I was happy with that shot,” Frizen said. “I was just hoping that she wouldn’t catch the ball.

Radcliffe also noted that he was pleased with the way the Lady Bulldogs responded.

Bearden may have had its share of struggles but Radcliffe might’ve found a budding star in Wentz, a junior, who played in her first full games Thursday night against the Lady Wildcats.

“She’s fearless and that’s what you want,” Radcliffe said of Wentz, who plays basketball. “She’s never played soccer. I pulled her off the basketball team.”

Wentz, who made nine saves on the night, recently returned to Knoxville.

She spent two years in her hometown of South Bend, Indiana after a stint at West Valley Middle School. She enrolled at Bearden High on April 21 and decided to play soccer when school resumed in August.

“This was my first full official game and it was nerve-racking but I relaxed a little bit once everybody got to moving around,” said Wentz, who also throws the discus for the Bearden track team.