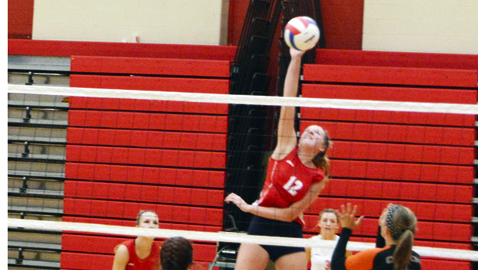 Whenever Clinton and Halls tangle on the volleyball court, the stakes are always high. The two teams, it seems are always battling for position in the District 3-AAA standings.

“This game is always so big for both of us,” Lady Dragons head coach Susan Zellner said after her squad dropped a 25-20, 25-20, 19-25, 26-24 decision to the host Lady Devils Tuesday night at Halls High School. “This match is important for both of us because we’re both always in the middle of the pack.

“Every time we come over here, they always take it away from us.”

The Lady Dragons (10-7 overall, 1-1 in District 3-AAA) didn’t do much to help themselves early. In fact, Clinton created its own adversity four days before making the short trip to North Knox County.

“And they weren’t sharp when they came in after four days off.”

The Lady Devils (5-2 overall, 2-0 in the district) were more than willing to take advantage of Clinton’s self-induced adversity.

Halls jumped out to a 17-7 lead before a side-out gave the Lady Dragons the serve. It was then that Madison Cumbie, the top server in Clinton’s rotation, took the ball and served up four consecutive points, including an ace, to help the Lady Dragons pull to within 17-12.

The Lady Devils would bounce back to open a 21-12 advantage on a service ace by libero Trinity Johnson before Clinton responded.

Trailing 24-17, the Lady Dragons scored the next three points before the Lady Devils close out the set.

The second set was similar to the first with the Lady Devils opening a big lead only to see the Lady Dragons bounce back to make things interesting.

Halls coach Jerrilyn Carroll said that her team’s service game and leadership provided the difference in the match.

“I think that we’re pretty evenly matched,” Carroll said. “I think our serves were what made the difference. We made good serves and had good leadership from our seniors.”

In the third game, the Lady Devils fell behind 8-5 before rallying back to eventually open an 18-13 lead. They would, however, let the advantage and the set slip through their grasp.

With the Lady Dragons down 18-14 (after a side-out) senior Kelley Wandell, who Zellner calls her best player, took the ball and engineered a service run that netted nine consecutive points and gave Clinton a 23-18 lead. The Lady Dragons then scored two of the next three points to capture the set and get back into the match.

“I was a little worried after we lost that third game,” she said. “I was concerned that we might’ve given away some momentum.”

But the coach didn’t have much to worry about. The Lady Devils recovered in rapid fashion. The final set was a see-saw affair but a big late service run by Devan Spencer allowed Halls to erase a 21-19 deficit and open a 24-21 lead before the Lady Dragons used one last gasp to knot things at 24 before Halls closed out the match.

Wandell, who missed the first set for the Lady Dragons, had 12 points, 10 kills and six digs while Jordan Bishop finished the match with nine points, nine digs and two aces.