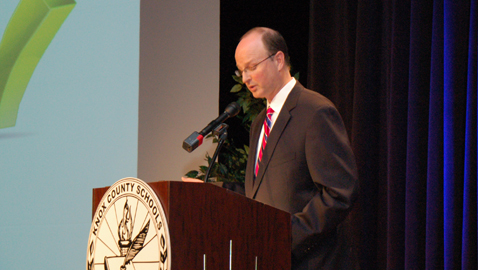 Knox County School Superintendent Dr. Jim McIntyre addressed elected officials, community leaders, parents, and teachers last week during his 2nd annual State of the Schools address at Powell High School. The address, which is essentially a precursor to upcoming 2013 budget discussions in Knox County, was riddled with the need for continued improvement within the Knox County School System and highlighted by examples of progress.

“In last year’s State of the Schools address, I said that we can do better, we must do better and, with your help, we will do better.  Tonight, I’m pleased to report, we ARE doing better,” McIntyre stated.

McIntyre indicated that TCAP proficiency rates in all four subject areas were higher than the state average, and increased by approximately 2-5% from the previous year, depending on the subject. He also added that in four out of six tested categories the school system had achieved a positive outcome as it pertains to high school students- including a more than 10% increase in proficiency on the Algebra I End of Course assessment.

Despite the progress reports, questions regarding the Knox County Board of Education’s pending investigation into a contract with former security system provider, PCSD, loomed like a dark cloud over the event.

However, McIntyre took the opportunity to address school security on another front. He indicated that he would like to see an armed school resource officer in each of Knox County’s 88 schools within this year. School safety was, in fact, among four budget priorities McIntyre presented for the upcoming school year.

“As I think about next year’s budget development process, and as I talk with parents, teachers and school board members, four clear resource priorities surface,” McIntyre stated.

“I truly believe we need to be willing to commit appropriate resources… to get great results,” McIntyre concluded.

The Focus will provide in-depth coverage of the upcoming budget discussions throughout Knox County both in print and online.