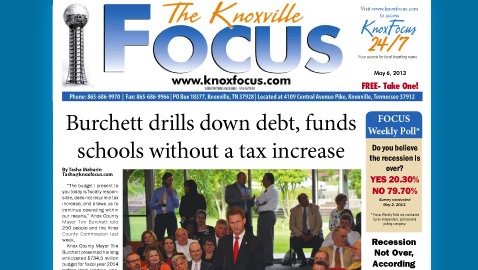 Burchett drills down debt, funds schools without a tax increase

“The budget I present to you today is fiscally responsible, does not require a tax increase, and allows us to continue operating within our means,” Knox County Mayor Tim Burchett told 250 people and the Knox County Commission last week.

This year’s proposed budget fully funds Knox County Schools’ $419.9 million budget request, provides nearly $1 million to the Knox County Sheriff’s Department for 25 new cruisers and a bus, and allows for a 2% cost of living adjustment for Knox County employees- all of which was done without a tax increase.

“Education remains one of my top priorities-and let me be very clear: We must continue to see gains in the classroom- and this means making sure money goes to educate students and support teachers,” Burchett stated.

Public safety accounts for the second largest portion of the county’s overall budget- with more than $75 million proposed this year- a nearly $1.3 million operational increase over last year.

In addition, Burchett has allocated $2 million for all employees of Knox County to receive a 2% cost of living increase.

“Our employees work hard, and they deserve this increase,” he added.

Burchett, often referred to as “tight with the checkbook” by many, has reduced the county’s overall debt by $60 million since 2012 by implementing a simple methodology: don’t borrow more than you pay down each year. The Mayor and the Knox County Finance Department also continue to capitalize on opportunities to “pay as we go”. They would like to see an overall debt reduction of $100 million by 2016. Burchett acknowledges this concept is foreign to many politicians in Washington but is a daily reality for almost every family living in Knox County.

“Now there are some who will say that these are just zeroes in a spreadsheet, but the truth is this sort of financial management will allow students to be sitting in brand new classrooms inside a new Carter Elementary School on August 12- which will be completely paid for at that time,” Burchett said.

This year’s budget also includes significant funding for libraries, public health, roads, and the construction of a new Senior Center in Karns.

After the conclusion of the budget presentation, Burchett and his staff left for a series of public meetings in order to listen to feedback and receive questions from the citizens of Knox County.

Knox County Commission, who must approve the proposed budget, is scheduled to begin discussion on May 29th and must make changes prior to the beginning of FY2014 in July.