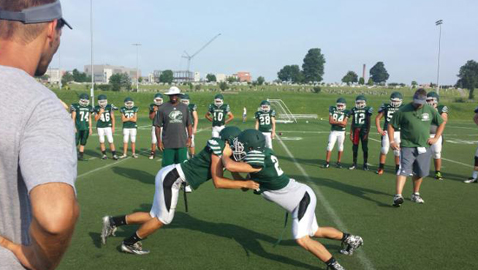 Two Carter players square off in a one-on-one drill during the team’s preseason camp last week at Eastern Kentucky University in Richmond, Ky. The Hornets will play Powell in the Kick-Off Classic Football Jamboree Aug. 13 at Central High School. The site for the second night of jamboree games on Aug. 14 has been changed to West High due to Bearden’s field not being ready after undergoing off-season work. The first Friday night of the 2015 season is Aug. 21.

By Steve WilliamsIf you’re a high school football fan, you already know Fulton and Maryville, maybe the two hottest teams in the state the past two years, are going to play each other this season and next.It’s already the buzz around the area among prep fans.Ideally, it would have been great, if the Falcons and Red Rebels could have somehow matched their talents the past two autumns, but schedules were already filled and the Dream Bowl couldn’t become a reality.Anyway, better late than never …Fulton will play at Maryville on Saturday, Aug. 29, the second week of the season. I e-mailed Rob Black, the Fulton coach, the other day to ask him what time the game would start and why it was being played on a Saturday.The game will kick off at 8 o’clock, Black replied.“We are playing it Saturday for TV purposes and also to give more people a chance to see it,” stated Black, who also noted his Falcons are playing Morristown West at 8 p.m. on Saturday, Aug. 22, in the Citizen-Tribune Kick-Off Classic at Burke-Toney Stadium in Morristown.In the first half of the annual classic in Morristown, Knoxville Catholic will play Morristown East at 4:30.While the Fulton-Maryville showdown simmers, I went ahead and took a peek at area season openers and there are some tasty dishes right out of the gate.The West Rebels, last season’s Class 5A state champions, and Hardin Valley Academy will be the first to take the field in a Thursday, Aug. 20, matchup at HVA. It will be former Loudon coach Jeff Harig’s first game as head of the West program.The opening Friday night card on Aug. 21 will see the birth of a new rivalry when The King’s Academy Lions go across the street to take on the Seymour Eagles in the first football game ever between the two schools.One of East Tennessee’s oldest border battles also will continue that night when the Clinton Dragons make the seven-mile trip to Oak Ridge to face the Wildcats at Blankenship Field.Also highlighting Week 1 will be Webb at Alcoa, Grace Christian Academy at Jefferson County and South-Doyle at Central.A more experienced Austin-East team hopes to get off to a winning start at Scott High and Powell will play its first game ever under new coach Rodney Ellison against visiting Farragut.Rounding out the first week of play will be Bearden at Karns, Livingston Academy at Christian Academy of Knoxville, Carter at Halls, Gibbs at Campbell County and Georgia School for the Deaf at TSD (Aug. 22).I can hardly wait.