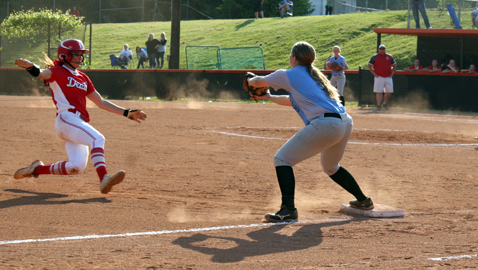 Youth at the top of its batting order came through for Gibbs High’s softball team in the District 3-AAA tournament finals.

The Lady Eagles sent a sophomore and two freshmen to the plate in the bottom of the eighth inning last Wednesday and the trio produced the game-winning run in a 4-3 walk-off victory over Halls.

Leadoff batter Leah Sohm, a sophomore, drew a base on balls to start the eighth.

“When I was in the on-deck circle, I knew I had to come through for my team,” said Hucklebee. “Seeing the hit go down and watching Leah step on home plate and my team come out was incredible. I feel so lucky to be a part of this team.”

Sierra said she didn’t think she would ever forget it.

“I knew I had to score,” said Sohm, named the tourney’s MVP. “I knew where the ball was placed and where it was hit. So I just told the good Lord to give me the speed to get home. And He did it, and it’s all glory to Him.”

An overflow crowd at Powell watched the fifth game of the season between the two rivals, who were co-champs in the regular season. Gibbs, which drew the top seed, has won three of the five meetings.

Winners will meet for the Region 2 championship Wednesday.

Halls outhit Gibbs 11-4, but the Lady Red Devils left 13 on base and committed four errors on defense.

“On our end, the story of the game was errors,” said Halls Coach Bryan Gordon. “We gave up one earned run. We played well enough outside those couple or three errors to win the ball game. When you make them against a good team, it always comes back to bite you.”

Not giving up a big inning to Halls was a key, said Coach Mitchell.

“They are a talented hitting team. Every time we’ve played them, you just try to keep them at bay. You hope they don’t get on a big roll.”

Halls cut the deficit to 2-1 in the fifth when Mallory Gardner singled and scored on a two-out single by Paige Calloway.

A solo home run to straightaway center by Lauren White pulled the Lady Red Devils into a 2-2 tie in the sixth.

Gibbs regained the lead with its third unearned run in bottom of the sixth. Sohm led off with a walk and raced to third on a throwing error. Hucklebee’s grounder to short brought her in.

Katie Corum’s leadoff homer to left in the seventh tied the game again for Halls.

The Lady Red Devils loaded the bases in the top of the eighth but failed to score.

Sohm scored three runs for Gibbs. Wheeler scored the other run, had a bunt single and two other key sacrifice bunts.

Halls leadoff batter McKenna Helton went 3-for-4 with a double.

Abby Hicks, a junior, went the distance to get the mound win. She struck out seven. Kim Blair took the loss.

“Abby pitched a perfect game and Rachel (Farmer) had a one-hitter for us in the tournament,” pointed out Mitchell. “Our defense was really good. If we had an error in this tournament, I don’t know when it was.”