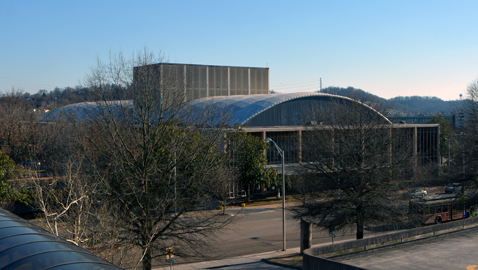 Recently the city received the final report from the Urban Land Institute which contained several recommendations for Knoxville, some of which are drawing questions and comments from elected officials and citizens.

Possibly the most controversial of the recommendations suggests that the Civic Auditorium and Coliseum be torn down.

“The panel recommends that the city cut its losses and relocate existing uses within the district to more appropriate locations,” the ULI report notes. The report goes on to recommend that the site be used for “a truly mixed-use and mixed-income neighborhood” that would include mixed-income rental and for-sale opportunities.

Relocating the coliseum as a new facility somewhere along Henley Street is also suggested and the report is drawing a number of comments from Knoxville elected officials. The city staff is reviewing the report and will hold a public meeting on Monday, March 30h at 5:30 to discuss the next steps. Comments on the report can be emailed to ULI@cityofknoxville.org. You can also read the ULI report on the city’s website.

Another report on the coliseum, by the Conventions, Sports and Leisure International, is due out later this month. This report is independent of the ULI report.

The Knoxville Focus asked all of the city council and Mayor Madeline Rogero for comments involving the ULI recommendation involving the coliseum.

Some replied by email and others called with comments. Here are the comments from the council members.

“The ULI report is, at this time, only a recommendation which will be studied with community input. Also the city is waiting on another report focused on the coliseum only. The Civil Auditorium and the Coliseum is a gateway to East Knoxville and the future of that area is vitally important to the city.”

“I am hesitant to create another huge parcel of land needing a significant amount of private investment to create a mixed-use neighborhood at a time when there are many other areas needing investment such as the McClung site, along Magnolia, the South Waterfront, Cumberland, Downtown North along Central and Broadway, and many other areas in the city. That said, whatever we do needs to make long term financial sense.”

“It is a little early to have a definite response. In general I think the facility brings value on many fronts, the Ice Bears, concerts, and on and on. It has wonderful parking and I value it as an asset. Lastly, in my mind, it is the gateway to East Knoxville and we need to continue to invest in East Knoxville, not take away from. Keep in mind that the report could shed light and all can change.”

“Before a decision is made about the future of the Coliseum-Auditorium a second study focusing exclusively on the site needs to be completed. A public process for input will take place and no decision will be made on recommendations from any two studies without that public process. ULI had several suggestions in their study and this site was not the top of the priority list. The James White Parkway serves as a barrier between this part of the city and the downtown area. A key concern for me is whether or not private-public partnerships can be established. While we need to maintain the momentum downtown we have other parts of the city competing for tax dollars, regardless of the source of those dollars.”

Councilman Della Volpe called and told The Focus that the ULI study provided “an interesting outside perspective” and that “much of the report failed to take in the practical reality of the proposals.”

“That’s what you get with a five day visit; it’s like a vision statement. The good news is that it brings a broader perspective.”

He said that moving the venue of the coliseum to a Henley Street location fails to consider traffic and parking there. The current location, he continued, offers “lots of ways to get people in and out.”

Della Volpe said he hopes the city study of various sites downtown, including the coliseum, should include an engineering and architectural firm.

Concerning the coliseum, Della Volpe said, “You could remodel your way” to make improvements at the current facility.

“I don’t have a comment at this time. I’m still studying the report and there is a public meeting on March 19th. I think if there is a way to update the facilities to increase capacity and attract better and bigger entertainers we should do that and save a lot of money. But if there is more attractive retail and or residential components that the city, the taxpayers, want to see development in place of the aging facility, then we need to seriously consider that as well.

“Who knows what creative proposals may come out of the woodwork, but most importantly we need to consider what the citizens want since their money will ultimately pay for whatever plan is chosen.”

“I will reserve comments until we have both reports, the ULI and the report on the coliseum. I’m looking forward to the public meeting on the 19th.”

“The future of the coliseum is all about vision. What is the entertainment vision for Knoxville for the next 50 years? My vision for Knoxville includes being an entertainment hub for the 9 county region; my vision includes increasing tourism; my vision includes expanding cultural and entertainment opportunities. My vision is larger than what can be accomplished in the current facility. The future of the coliseum must be debated and discussed both in the City and Knox County. Funding for a venture that meets my vision will require funding from both city and county.”

Councilman Duane Grieve told The Focus he has been unable to fully respond because of a death in his family, but added that “I am waiting to see what the consultants have to say about the coliseum’s future.”

“The ULI panel has given us many exciting and challenging ideas. It’s good to get outside perspective and expertise to complement the City’s planning efforts and the huge amount of input from local stakeholders.”

“Our next step will be a public meeting on Monday, March 30, at the East Tennessee History Center, 601 S. Gay St.

”On March 30, we’ll present how we’re prioritizing the ULI recommendations, and then we’ll gather more public feedback. Anyone wishing to comment on the ULI report – either now or after the March 30 public meeting – can email the City’s Office of Redevelopment at ULI@cityofknoxville.org.”