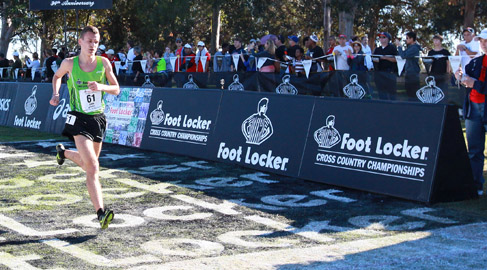 Aaron Templeton is getting ready for the final lap in what already has been one of the best high school careers ever posted by a Tennessee cross country and track athlete.

Although his last race didn’t go as he wanted, the Hardin Valley Academy senior achieved prep All-America honors for the second straight year at the Foot Locker Cross Country Championships National Finals on Dec. 14 and has now started training for this spring’s outdoor season as a distance runner for the Hawks. He plans to sign with Furman University in February.

Templeton earned his second trip to the nationals in San Diego by winning the South regional meet in Charlotte, N.C., on Nov. 30.

One of only 40 athletes to qualify for the prestigious Foot Locker event, Templeton, the two-time Tennessee state champion, placed ninth, covering the 5,000 kilometers at Balboa Park in 15 minutes, 29 seconds – the same time he was clocked in when he finished seventh in the event as a junior.

Grant Fisher of Grand Blanc High School in Michigan won the national title with a time of 15:07. John Dressel of Mt. Spokane High in Colbert, Wash., was second in 15:10. They were two of eight juniors that placed among the top 13.

The competitor he is, Templeton wanted to do better.

“At first I was very disappointed and angry with myself,” said Templeton last week via e-mail. “But now I’m just using it as motivation for this track season.

“My plan going in was to get out quickly and get to the front, get relaxed and then move on the second loop of the course, but I was never really able to get into a rhythm and just had a bad day.”

Looking at the big picture, Hardin Valley Coach Bryan Brown ranks his star harrier among the best the state has produced.

“It’s weird to think that people could consider me that way,” said the humble Templeton. “I know going through my high school career, I looked up to the guys who had previously made it to Foot Locker Nationals, like Andrew Bumbalough, Matt Sonnenfeldt, and Clint McKelvey as the greats of Tennessee, and I only hope to be a good role model for young athletes to look up to.”

Bumbalough starred at Brentwood Academy in the mid-2000s and ran for Georgetown University. Now 26 years old, he is a middle/long distance runner for the United States and has posted times that rank him with elite distances runners in American history.

Sonnenfeldt, a 2009 Knoxville West High graduate, was TSSAA state champion in cross country in 2008. He became a two-time All-NCAA Southeast Region honoree in 2011 and 2012 while running at North Carolina State.

McKelvey is a product of Maryville High and was a 2008 Foot Locker finalist, placing eighth in the South and 29th in the nationals. He became a prep All-American at Maryville and the school’s first state track champion, winning the 3200-meter run in 2009.

McKelvey made the U.S. National Junior team his freshman season at Duke. After missing 2 ½ years due to injury, he returned for his senior cross country campaign this past fall and ended the season with a personal best time of 31:39.7 in the Southeast Regional 10,000-meter championship race.

Templeton was asked to reflect on his entire prep career up to this point.

“I think it has been a huge success and it’s a giant blessing to be where I am,” he answered. “I’m most proud of all the work I put in and seeing the results.”

Templeton’s senior season in cross country was near perfect. He won the annual Knoxville Interscholastic League meet at Sequoyah Park, leading the Hardin Valley boys to the team title again. He ran a record time of 15:16.44 in winning the Region 2-AAA crown.

Templeton also posted a new record (15:10.57) in repeating as Class AAA state champion in the TSSAA meet on the Steeplechase Course at Percy Warner Park in Nashville. In the South regional, Aaron won by eight seconds over his nearest challenger, clocking a personal-best 5k time of 14:36 at Charlotte’s McAlpine Greenway..

This winter, Templeton said he would be doing base miles with aerobic strength workouts to build his aerobic base.

As for his future collegiate career, Templeton said he looked at a lot of schools.

“It ended up coming down to Northern Arizona University and Furman,” he said. “I really like everything about Furman, especially the team, coaches and the guys in the current recruiting class.”

Furman is getting a good one . . . one of Tennessee’s best ever.