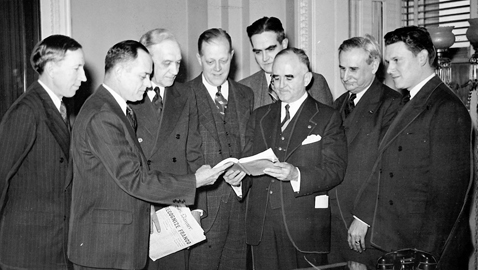 1939 was a difficult year for the country, but it was an especially difficult year for our Congressional delegation.  War clouds were gathering over Europe with Adolf Hitler’s territorial ambitions and visions of conquest threatening the peace of the world.  By the fall of 1939, Great Britain and France would declare war on Germany for invading Poland, inciting the Second World War.

President Franklin D. Roosevelt would struggle with Congress over American neutrality, facing a powerful coalition of isolationists in Congress who wanted no part of another world war.

Also by the end of 1939, Tennessee lost three out of nine members of its Congressional delegation.  Death stalked not only the battlefields of Europe, but the halls of Congress.

The senators from Tennessee, Kenneth D. McKellar and A. T. “Tom” Stewart were a contrast in seniority.  McKellar was one of the more senior members of the Senate and had been in Congress since 1911.  Stewart had just been elected in a fiercely fought special election brought about by the sudden death of Senator Nathan L. Bachman, who had died just months into a new six-year term.  Then-governor Gordon Browning had appointed labor leader George L. Berry to fill the vacancy.  Berry had sought to be nominated in the 1938 primary, as did Fourth District Congressman J. Ridley Mitchell, but Stewart, a local District Attorney, had the backing of McKellar and the senator’s friend and political partner, E. H. Crump, leader of the Memphis machine.

Senator McKellar was well poised to assist Tennessee and Tennesseans and was legendary for his ability to produce projects and favors for constituents.  It was a godsend for many Tennesseans during the height of the Great Depression.  McKellar was Chairman of the Senate Post Office and Post Roads Committee, a relatively minor post save for the fact it gave the senator enormous influence in naming people all across the Volunteer State as postal employees.  McKellar was also the ranking member of the Senate’s Appropriations Committee, a position of greater importance to Tennesseans as every federal dollar spent by the government went through that committee.  With the Chairman of the committee, Virginia’s Carter Glass ailing, McKellar was frequently called upon to do much of the work and he exercised tremendous influence.

Carroll Reece and J. Will Taylor represented the heavily Republican portions of East Tennessee.  Taylor had risen from poverty to become the “boss” of Tennessee’s Republican Party.  First elected to Congress in 1918, Taylor had been Republican National Committeeman from Tennessee since 1922 and during the administrations of presidents Warren G. Harding, Calvin Coolidge, and Herbert Hoover, “Hillbilly Bill” had been highly influential in patronage matters for his own party.

Taylor and Reece were less warm friends than rivals inside Tennessee’s Republican Party.  The GOP had ceased to be a factor in statewide elections with the advent of the New Deal and Franklin D. Roosevelt.  Republicans had last elected a governor in 1920 and had never elected a United States senator since the institution of popular election of senators in 1916.  Presidential elections had been slightly different and Tennessee had voted for Warren G. Harding in 1920 and Herbert Hoover in 1928, although the latter was likely due to the Democratic candidate’s Catholicism rather than any real enthusiasm for the GOP candidate.

With the Great Depression, Tennessee became largely a one-party state and the Republicans poised no real threat to the Democrats in statewide elections.  Reece and Taylor sniped at one another over patronage and prominence.  Both had in recent years suffered some unpleasant electoral surprises.  Reece, having been in Congress since 1921, had actually lost his seat to Oscar B. Lovette in 1930.  Reece ran again in 1932 and managed to beat Congressman Lovette in the GOP primary to regain his seat in Congress.  Reece would remain in Congress until he voluntarily retired in 1946 to become Chairman of the Republican National Committee.  Reece would be the Republican candidate for the United States Senate in 1948, but lost to Estes Kefauver.  Reece would then turn his sights back to regaining his old Congressional seat and defeated the incumbent and remained in the House of Representative until his death from lung cancer in 1961.

J. Will Taylor, from LaFollette, had won his seat in 1918 by beating an incumbent inside the Republican primary,  Like Reece, Taylor had been caught by surprise in at least one election and had quite nearly lost to Democrat John J. O’Connor, Mayor of Knoxville, in 1936.  Some old-timers speculate that it caused much anguish on the part of Republican leaders as well as more than a little creative managing of the election returns to save J. Will Taylor that year.

With FDR’s election and both houses of Congress, as well as the statehouse, in the hands of the Democrats, there was little left for Carroll Reece and J. Will Taylor to bicker over.

Sam D. McReynolds of Chattanooga, was likely the single most powerful member of Tennessee’s House delegation.  An affable former judge, McReynolds had become Chairman of the House Foreign Affairs Committee when Democrats recaptured the House of Representatives.  It was one of the more prestigious assignments in Congress, although of negligible importance to one’s district and state.  It was doubly important for McReynolds with Tennessee’s own Cordell Hull serving as Secretary of State.

Albert Gore was one of two freshmen Congressmen representing Tennessee.  Young and ambitious, Gore had succeeded J. Ridley Mitchell who had run for the Senate in 1938 and lost.  Gore out-campaigned a host of opponents inside the Democratic primary to win the nomination and a seat in Congress.

Joseph W. Byrns, Jr., like Gore, was a newly elected member of Congress, yet he had one of the most familiar names in Tennessee politics at the time.  His father, Joseph W. Byrns, had been the Congressman from Nashville from 1909 until his death in the summer of 1936.  The elder Byrns had risen to become Speaker of the House and occupied that exalted position when he died June 4, 1936.

Speaker Byrns had been succeeded by Richard M. Atkinson in the 1936 election.  Atkinson was especially loathed by Senator McKellar and the younger Byrns challenged and beat Atkinson in the 1938 primary.  Byrns, like his predecessor, was to serve only the single term in Congress.

Clarence W. Turner of Waverly was a veteran politician and at age seventy-two, was the oldest member of the Tennessee Congressional delegation.  Turner had been elected to the Tennessee State Senate in 1900.  In the following decades, Turner engaged in the banking business and had been elected Mayor of Waverly.  Turner also won a special election to Congress in 1922, but served only a few months before returning to his West Tennessee home.  Turner was elected Humphreys County Judge in 1924 and remained in that office until 1932 when he was elected to Congress to succeed Edward E. Eslick, who had died.

Herron Pearson of Jackson, Tennessee, had come to Congress in 1934 when Gordon Browning gave up his Congressional seat to challenge Senator Nathan L. Bachman for reelection that year.  Like many another Tennessee Congressman, Pearson had been a judge before winning a seat in the House of Representatives.  Pearson, quiet, hard working, was not enamored with life in Washington and retired from Congress in 1942 to go home to Tennessee and practice law.

Jere Cooper of Dyersburg, unlike Herron Pearson, made a career out of Congress.  First elected in 1928 when Congressman Finis Garrett gave up his seat to run against Senator K. D. McKellar, Cooper had barely won the Democratic primary, yet he remained in Congress for the rest of his life.  In fact, serving in Congress became Jere Cooper’s life and over time he watched his wife and only child pass away, leaving him a frequently lonely man.

Cooper became Chairman of the powerful House Ways and Means Committee, making him one of the most influential members of Congress.  Following a heated and close reelection campaign in 1956, Cooper died from a heart attack in 1957.

Walter Chandler’s home was in Memphis, the heart of the machine run by Edward Hull Crump and Chandler was a charter member of the Crump machine.  In fact, Chandler was Crump’s pick to succeed him in Congress.  The Memphis Boss had decided to go to Congress in 1930, much to the surprise and dismay of incumbent Congressman Hubert Fischer.  Congressman Fischer had grown increasingly deaf and Crump thought him ineffective.  The Memphis Boss did not especially enjoy life in Washington and discovered he was but one of many Congressmen in Washington, while in Memphis there was only one Crump.  Moreover, the Boss missed his family and decided to retire after serving only two terms in Congress.

Chandler was elected in 1934 and would himself leave Congress in early 1940 to answer Crump’s call yet again and serve as Mayor of Memphis.

The first member of Tennessee’s Congressional delegation to die was Clarence W. Turner, who died in Washington, D. C. on March 23.  Evidently the elderly Congressman was stricken by a heart attack and died.

Congressman Sam D. McReynolds followed on July 11, 1939.  Still highly popular in his district and at the height of his prestige and power, McReynolds, too succumbed to a heart ailment.

The last to die that year was J. Will Taylor.  “Hillbilly Bill” had driven from Washington to Knoxville and from Knoxville on to his home in LaFollette where he became seriously ill.  Congressman Taylor took to his bed and his wife was by his side when he slipped away the next day.

In a matter of months, Tennessee lost some forty-six years of Congressional experience and seniority.