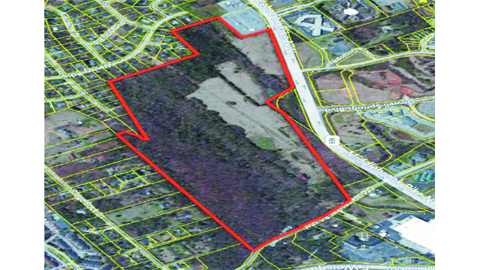 Tennova Healthcare has acquired an option to purchase approximately 110 acres of land on Middlebrook Pike near Old Weisgarber Road, located in one of the fastest growing areas in Knoxville.

When Tennova Healthcare announced earlier this year that it had secured an option to buy 110 acres off Middlebrook Pike near Old Weisgarber Road, it was made immediately clear that the site would potentially be home to a replacement hospital for Physicians Regional Medical Center, located at 900 E. Oak Hill Ave. in the North Knoxville community.

Neighborhood groups in North Knoxville immediately expressed concern as to the fate of the current hospital- referred to most commonly among residents as “St. Mary’s.” While residents and neighborhood groups in West Knoxville have expressed concern regarding integration of the potential 401-bed flagship campus Tennova intends to construct off Middlebrook Pike into the existing neighborhood.

“We live in neighborhoods too,” Vice President of Business Development and South Knoxville resident Melanie Robinson told The Focus. “We’re extremely empathetic to the concerns of the neighborhoods.”

Tennova Senior Vice President Jerry Askew added that, not only does Tennova want to keep an open line of communication with the neighborhood groups; they have also addressed some of the issues brought forth by the community.

“We actually had our architects change the entire orientation of the proposed hospital because area residents had expressed concern over the potential noise level,” he explained.

Robinson confirms, however, that Tennova is committed to repurposing the campus. Tennova is currently working with potential partners to accomplish this but are not at a point in the negotiations where they can prudently discuss specifics. Some proposed intended uses include: primary care, senior care, administrative offices, behavioral therapy, and urgent care services.

North Knox residents have publicly expressed apprehension over behavioral therapy as a potential use for the site, however, Robinson is quick to point out that behavioral therapy is already a large component of the care currently offered at Physician’s Regional.

“I think it speaks highly to the quality of behavioral care that we offer there, that so many are unaware that we actually do provide it at that location,” she related.

In fact, Physician’s Regional has served the North Knoxville community with a wide range of healthcare since 1930 and has been expanded more than 6 times.  According to Tennova, the facility’s age, inadequate access, and lack of available property for expansion all render a renovation unfeasible.

Tennova officials maintain that the selection of the new site is more than just “westward expansion.”

While Physicians Regional is located in North Knoxville, they actually serve 11 counties and have the busiest emergency room in the city. The new site was partially selected because of its central location.

On a national level, the selection of the new site also reflects the ever evolving face of healthcare under the Affordable Healthcare Act. Robinson added that healthcare is becoming increasingly more “consumer oriented”. She also suggested that while this is not a bad thing, it does require changes in the way healthcare is offered.

Askew maintains that while change is inevitable the core mission of Tennova is static.

“Our goal is to continue to bring value to the communities we serve,” he stated.

In this instance they plan to do so by maintaining a level of service at Physicians Regional while expanding and improving upon their services with a new hospital.

The Focus will continue to follow this story as it develops both in print and online.