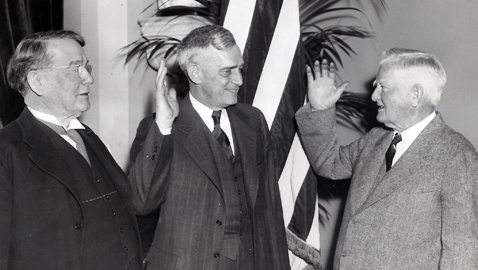 A  bare-knuckle political battle had rolled across Tennessee for the Democratic nomination fort the United States Senate in 1938.  The contest was a three way fight between incumbent U. S. Senator George L. Berry, Congressman J. Ridley Mitchell, and A. T. “Tom” Stewart.

There was actually a fourth candidate on the ballot for the nomination for the United States Senate: Edward Ward Carmack, Jr.  “Ned” Carmack was the son of former U. S. Senator W. W. Carmack, a martyr to many Tennesseans as he had been slain in the streets of Nashville in 1907, Tennessee’s fiercest advocate for prohibition.  While he had never been elected to any office and was inexperienced in politics, the younger Carmack had officially announced his own candidacy, although there were persistent rumors throughout the spring he would withdraw from the race.  Carmack declared in April of 1938 he would run “a victorious and active campaign” and went so far as to state he would open his Senate bid on May 14, although he did not reveal a location for his opening.

Ned Carmack never really was a factor in the Senate campaign after a mysterious incident where he was found bloodied and badly beaten near his abandoned car.  Carmack’s campaign collapsed entirely as the prospective candidate was hospitalized for quite sometime and the beating he endured was so violent it left him with a permanent limp for the remainder of his life.

Senator Berry had long been involved in Democratic Party politics and was the President of the International Printing and Pressmen’s Union.  Berry had held a number of minor posts under President Franklin Delano Roosevelt’s New Deal administration.  A burly man with hair carefully combed to unsuccessfully disguise increasing baldness, Berry was jovial, loud, and forceful.

Ridley Mitchell was tall, bald, and a skilled politician.  Mitchell was almost a caricature of a modern-day politician who smiled at everybody, promised just about everything, and had a fine-tuned sense of opportunity.

With a full head of steel-gray hair, a winning smile when he cared to use it, and an unassuming manner, Tom Stewart was a likable fellow.  Like his opponents, Stewart was a good speaker and met people well.  Tom Stewart was, if anything, a truly kindly man.  Both Berry and Mitchell were usually very well dressed, with Senator Berry favoring double-breasted suits with vests.  Tom Stewart usually had a more rumpled appearance, very much like the small town lawyer he was.

Berry had been appointed to the United States Senate following the sudden death of Senator Nathan L. Bachman by Governor Gordon Browning.  It was likely not the best appointment Browning could have made and Berry’s first act as Tennessee’s new senator had been to hire the governor’s older brother, F. L. Browning, as his Secretary.  As time passed and George L. Berry’s dispute with the Tennessee Valley Authority over mineral rights, leases and marble deposits on property flooded by the TVA became more heated, Senator Berry became more and more a liability to Gordon Browning.  Worse still, despite having been an important supporter of President Roosevelt, it became readily apparent Senator Berry was running for reelection on a platform at least somewhat critical of FDR.  Berry was thought to have been a sure supporter of Roosevelt’s plan to enlarge the United States Supreme Court, but despite being in the Senate Chamber at the time of the vote, Berry cast no vote, a fact that infuriated a vengeful Franklin Roosevelt.

Tennessee’s senior United States senator, Kenneth D. McKellar, had loyally supported the President and immediately reminded FDR of Berry’s perfidy.  The New Deal administration consolidated Federal patronage in McKellar’s hands, giving him even more influence both in Washington and Tennessee.  Despite the disagreements between McKellar and Berry,  the junior senator did not complain when his colleague secured an appointment for former Governor Hill McAlister.  McAlister had retired after two terms in 1937; like many others, McAlister needed an income and Senator McKellar arranged for McAlister’s appointment as counsel to the Bituminous Coal Commission.  The appointment carried with it a salary of some $8,000 annually, a handsome sum at the time.  Several Tennessee newspapers complained about the appointment and were aghast when Senator George L. Berry announced he would not oppose McAlister’s appointment.

“I am not the kind to throw people of out jobs when they need them and I assume Governor McAlister needs it,” Berry explained.

Senator McKellar loathed Gordon Browning and had handpicked Tom Stewart to challenge Berry in the Democratic primary, a fact which irked Congressman J. Ridley Mitchell.  Congressman Mitchell had gone to McKellar’s office to solicit his support, but had left angry as the senator bluntly told him the opposition to Governor Browning and Senator Berry would run as a ticket.  Mitchell disliked the idea of entangling himself in other races and was clearly unhappy he could not garner McKellar’s support.

Determined to make the race for the Senate, Mitchell cast himself into the only role left available to him; that of a “harmony” candidate.  Tennessee’s Democratic Party was torn asunder by the two dominant factions; the state organization headed by Governor Gordon Browning and the Federal faction headed by Senator K. D. McKellar.  McKellar’s organization stretched from Mountain City to Memphis and was closely allied with the Shelby County political machine led by McKellar’s personal and political friend, Edward Hull Crump of Memphis.

Crump had backed Gordon Browning for governor in 1936, much to McKellar’s dismay.  Less than a year later, Browning and Crump had a spectacular falling out and the Memphis Boss had begged Senator McKellar for help when the governor initiated a furious assault on the power of the Shelby County machine.  It was McKellar who picked Prentice Cooper to run for governor and Tom Stewart to run for the United States Senate.  Crump had followed McKellar’s lead and a coalition ticket was formed with Cooper for governor, Stewart for U. S. senator, and W. D. “Pete” Hudson for Utilities Commissioner.

J. Ridley Mitchell traveled across Tennessee, denouncing the idea of coalition politics, complaining that McKellar and Crump were seeking to control everything in the Volunteer State.  Mitchell portrayed himself as the only candidate who could heal the breach in Tennessee’s Democratic Party.

Senator Berry, despite being alienated from President Roosevelt, was campaigning more as a conservative Democrat, an odd stance for the president of a union.  Berry was highly critical of the New Deal intruding into private business and considering his own vast business holdings and bitterness with the Tennessee Valley Authority, it was perhaps a reflection of his own disappointment.  Governor Browning tried to ignore Berry as the primary election approached, but it was an association that hung around his neck like an anvil.

Tom Stewart’s platform was quite simple and meant to contrast with the record of Senator George L. Berry; Stewart was running as an all out supporter of Franklin Delano Roosevelt and the New Deal.  Tom Stewart was 100% for Roosevelt.  The coalition ticket traveled Tennessee together during the first months of the campaign; one of the three candidates would be the featured speaker while the other two would make shorter speeches.  The Cooper – Stewart – Hudson ticket opened their campaign with a gigantic barbecue in Greeneville.  Tom Stewart was introduced to the several thousand people in attendance by Chattanooga State Senator Fletcher Morgan who proclaimed Stewart as “a man with the patience of Abraham Lincoln and the foresight of Woodrow Wilson”.  Stewart, speaking last on the bill, hammered home his support for President Roosevelt and the New Deal.

Later, campaigning in Waverly, Stewart confided to his audience both Senator Berry and Governor Browning intended to bolt the Democratic Party and run in the general election as Independents, something not unprecedented in Tennessee politics, but inaccurate in this instance.

“They know they are whipped,” Stewart cried.  “They are November bound and they knew they would be all the time.”

As the primary campaign drew to a close, each seemed to have enough money to get his individual message to the voters.  Senator Berry’s campaign especially seemed not to lack for money and he had been collecting contributions from labor organizations all over the country.  Berry supporters sported handsome campaign buttons with the senator’s picture on it and there were full color posters, which was a rarity for the time.  The Berry campaign even put out a set of round George L. Berry playing cards; it was not coincidental that Berry owned the biggest playing card printing company in the United States.

Posters and buttons for “Cooper – Stewart – Hudson” were just as plentiful across the state.  The coalition ticket was also well financed and Berry would later complain many Federal employees were assessed contributions illegally.  The same charge would be made against the Browning and Berry forces who derived considerable support from state employees.

Election Day brought a smashing victory for the coalition ticket.

Senator Berry carried the First District, which was ordinarily heavily Republican.  It was Berry’s home, but Tom Stewart ran a surprisingly strong second.  The First District was an area where Senator McKellar was enormously popular and the McKellar organization was quite strong, which helped Stewart make an impressive showing in Berry’s home area.  Stewart won both the Second and Third Districts, allowing him to carry East Tennessee by a solid majority.  Congressman Ridley Mitchell, little known in East Tennessee before the campaign, ran a poor third.

West Tennessee voted strongly for Tom Stewart.  The Seventh District was the home of Gordon Browning and Browning had been the Congressman from the district for twelve years and both Browning and Senator Berry carried the area.  Tom Stewart won the Eighth District and the Ninth.  The Ninth District was Shelby County, home to the machine led by E. H. Crump and the majority for Tom Stewart was enormous.  Senator Berry ran second with Congressman Ridley Mitchell barely making a showing.  Having carried both East and West Tennessee, Tom Stewart won the Democratic nomination for the United States Senate.  Even though he had not carried one of Tennessee’s three Grand Divisions, Senator George L. Berry came in second with Congressman J. Ridley Mitchell bringing up the rear.

As the nominee of the Democratic Party in Tennessee, Tom Stewart was all but elected to the United States Senate.  Stewart would go to Washington, D. C. where he would remain for the next decade.