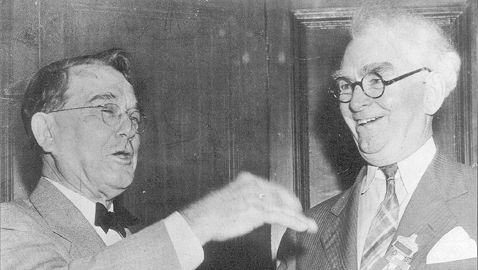 By Ray Hill
The political pot in Tennessee ceased to boil when Governor Gordon Browning appointed George L. Berry, President of the International Printing and Pressmen’s Union, to the United States Senate on May 7, 1937.  Still, the pot certainly continued to simmer with a host of prospective candidates talking about running in the special election the next year.

It was another visit to Memphis that would cause the rupture that led to open warfare in Tennessee politics.  Governor Gordon Browning went to Memphis on September 13, 1937 to visit Crump.  The Memphis Boss and Governor Browning would have very different versions of the conversation which took place in Crump’s business office.  According to Crump, the governor arrived with a proposition; Browning proposed that he run for the United States Senate in 1938 with Crump’s support.  Browning also proposed that Crump and the Memphis machine support Lewis Pope for governor and in turn, they would support Crump for the Senate in 1940 against incumbent Kenneth D. McKellar.

“I want you to go to the United States Senate in 1940. I can send you!” Browning allegedly told Crump.

Gordon Browning’s ultimate political goal was to sit in the United States Senate and it was a cherished dream he did not give up until the end of his career.  Browning may have hoped Crump’s own ambition would cause him to drop his long-time political alliances.  Still, Crump loathed Lewis Pope who had twice bolted the Democratic Party and had used the Memphis machine as a whipping boy during both campaigns.  Crump and McKellar were not only personal friends, but also political partners and it was foolish for Browning to think the Memphis Boss would challenge McKellar.  Senator McKellar presided over an organization that stretched the length and breadth of Tennessee while Crump’s political power was centered in his domain of Shelby County.

Governor Browning had appointed Lewis Pope as a Special Investigator for the State of Tennessee; Pope’s purpose was to collect monies owed to the state government and would provide him with a very lucrative income.  Pope had sought a Federal appointment in 1935 after having left the Democratic Party to run as an Independent in the 1934 general election.  Pope had allied himself with the Republicans, but Senators McKellar and Bachman seemed willing to help him secure an appointment nonetheless.

Crump had strongly supported Gordon Browning’s gubernatorial campaign in 1936, but had been surprised and distressed by many of the governor’s appointments, not the least of which was that of Lewis Pope.  Crump grew increasingly uneasy as Senator McKellar sent a steady stream of letters from Washington warning the Memphis Boss he could not trust Gordon Browning.  The governor’s visit to Memphis and the political trade he offered proved to be the breaking point between Crump and Browning.  Crump refused to “put my feet under the same table as Luke Lea” and marveled at Browning’s willingness to “throw George Berry in the Holston River”.

Governor Browning replied, “There is not a truthful statement in his whole harangue”.  Browning explained the Memphis Boss’s outburst by saying, “Mr. Crump’s pride was hurt when I didn’t appoint him to the United States Senate.”

Crump admitted that he had told Browning had the governor truly wished to see him in the United States Senate, he could have appointed him instead of George L. Berry.  In fact, Crump may have wanted Browning to offer him the appointment, although it is quite likely the Memphis Boss would have majestically turned it down.  Crump had not liked Washington while serving as a Member of Congress and probably would not have relished the idea of serving as the most junior member of the Senate.

Browning, realizing his alliance with Crump and the Shelby County machine was at an end, took drastic action to cripple Crump’s political organization.  Browning summoned the legislature back into session to consider several bills, one of which was the governor’s “county unit” plan.  The county unit plan would have assigned a certain number of votes for each county in Tennessee, much like the national Electoral College.  It would mean a candidate for office could win the popular vote and still lose the election because he did not win a majority of the county unit votes.  The practical effect was the county unit plan would make the huge majorities for Crump favored candidates meaningless.

E. H. Crump, caught completely by surprise, was stunned by the governor’s actions.  The Memphis Boss issued orders to his legislative delegation to fight the plan at all costs.  Browning’s appointee to the U. S. Senate, George L. Berry, hurried to Nashville to do whatever he could to help influence state legislators to support the governor’s bills.  Berry had left Denver where he was attending the American Federation of Labor convention to check into the Hermitage Hotel in Nashville.  Berry’s Secretary, F. L. Browning, issued a statement that Senator Berry was “very much interested” in seeing the county unit plan passed by the Tennessee General Assembly.

Crump pleaded with Tennessee’s senior United States senator, K. D. McKellar, for help.  Senator McKellar wired Walter M. “Pete” Haynes, Speaker of the Tennessee House of Representatives, that he was coming to Nashville and wanted to be heard by the General Assembly.  Haynes, a veteran of Tennessee politics, was quite friendly with McKellar and knew all too well the old senator virtually controlled all the Federal patronage in Tennessee.  Many legislators turned to McKellar for favors of all sorts, as well as jobs for friends, family members and constituents.  Irrespective of the pressure being applied on legislators by Governor Browning, Speaker Haynes had no intention of offending Senator McKellar.

Haynes sent McKellar a wire explaining the schedule of the House and told the senator he was welcome to speak.

As McKellar was on his way to Nashville, he released a public statement to the people of Tennessee urging the county unit plan be defeated.  Senator McKellar sent out a call to “all good citizens in Tennessee who believe in fairness and justice” to contact their legislators and ask them to vote against Governor Browning’s county unit bill.  In typically blunt McKellar fashion, the senator said, “There is not a question but that this measure is aimed at me.”  Senator McKellar was alluding to Gordon Browning’s desire to run against him in 1940, but McKellar went on to say the interest of one individual should be disregarded, but Browning’s bills would weaken the Democratic Party in Tennessee.  Describing Browning’s legislation as “vicious” and “nefarious,” McKellar declared, “The bill is vicious in that it is aimed to legislate into office by a minority vote of a single man.  In the next place it provides for the disenfranchisement of the citizens of about 40 counties.”

McKellar noted virtually every newspaper in Tennessee was against Browning’s plan and the senator said,  “Practically every disinterested person in the state who is not directly or indirectly on the state payroll is against the measure.”

Senator McKellar concluded his appeal by noting, “I am in favor of a majority rule.  I am not afraid of the people’s vote.”

Senator George L. Berry spoke in favor of Browning’s proposal, while McKellar appeared and roundly denounced it.  Both sides were working hard and the Browning administration, with the governor’s future political survival at stake, was ruthless in its efforts to line up the necessary votes.  Browning got his bills passed, only to see them struck down by a court.

With the county unit plan dead, all eyes turned to the coming primary elections.  It was clear Governor Browning and Senator Berry would be strongly opposed by the McKellar – Crump alliance.  Potential candidates started emerging and by November of 1937 Fourth District Congressman J. Ridley Mitchell was strongly hinting he would be a candidate for the Senate.  Mitchell acknowledged the Tennessee Democratic Party was deeply divided, stressing the need for a candidate who could bridge the factions inside the party.  “Friends” of the Congressman were quoted as saying they fully expected Mitchell to have the support of Senator McKellar.

In Washington Senator George L. Berry was given a cool reception by his senior colleague.  Berry immediately proposed a division of the Federal patronage in Tennessee, a request Senator McKellar tartly replied he could not agree with.  Berry also embarrassed Governor Browning and infuriated President Roosevelt by not voting in favor of FDR’s plan to enlarge the United States Supreme Court.  Berry was in the Senate Chamber when the roll was called, but did not answer.  Senator McKellar loyally supported the President and made certain Roosevelt knew Berry had not supported the administration.  Roosevelt, deeply angry with those Democrats who had opposed his court packing plan, was already making plans to purge conservative Democrats in the coming primaries.  George L. Berry’s failure to support the President helped to consolidate all patronage power in Kenneth McKellar’s hands.

It would prove to be an effective weapon as the elections approached.