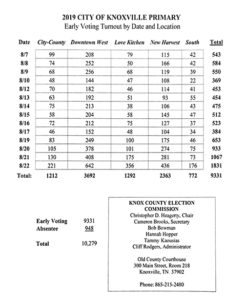 Given a large turnout Thursday during the last three days of Early Voting, when 1831 voted and 948 voted by absentee ballot, the hoped-for 10,000 was met. As the final day approached more and more people voted and Downtown West topping the other polling places during the early voting with a total of  3,692 votes, followed by New Harvest with 2,363 votes. At the Love Kitchen a total of 1,292 votes were cast and the City-County Building saw 1,212 votes. The South polling place at the Meridan Baptist Church saw 772 voters.