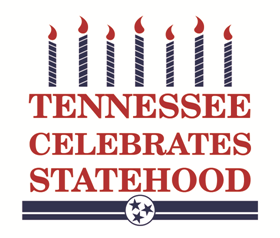 When Tennessee became a state June 1, 1796, only about 77,000 people lived here. Tennessee was the country’s 16th state and the first to be created from territory that had been under federal jurisdiction. Since its humble beginnings, Tennessee has become home to millions of people and shares borders with eight other states – tied with Missouri for most in the nation.

People of all ages can learn more about Tennessee’s rich history during a special event June 3 at the Tennessee State Library and Archives. The free event, called “Tennessee Celebrates Statehood,” will give visitors the opportunity to view all three of the state’s original constitutions, see presentations by historical interpreters and listen to music from the 1700s. There will be lots of activities for children, including early American games on the Library and Archives lawn and stations where kids can get temporary tattoos of the state flag or make birthday cards for Tennessee. And, since it’s a birthday celebration, of course there will be cake!

Historical interpreters will tell visitors what it was like to be a fur trapper on the Tennessee frontier, an early land surveyor or a civil rights activist. The state’s constitutions – the first adopted in 1796 and revisions adopted in 1834 and 1870 – will all be on display in the Library and Archives lobby.

The Library and Archives will be open for normal business from 8 a.m. until noon June 3. Then the building will temporarily close while the staff prepares for the “Tennessee Celebrates Statehood” event, which will be 2 p.m. until 5 p.m. that day.

“Part of our mission is to make our state’s history accessible to a wider audience beyond scholars and researchers,” Secretary of State Tre Hargett said. “This event will be fun and educational for the whole family. We are also very pleased to make all three of the original constitutions available for display. History truly comes alive when you see those documents up close.”

The Library and Archives typically keeps the constitutions stored within its vault, but this is the first time all three documents will be publicly displayed at the building. For people who cannot attend the event June 3, the constitutions will also be on display June 1 (the actual anniversary of Tennessee’s statehood) and June 2 from 9 a.m. to 3 p.m. They will also be on display from 9 a.m. until noon before the “Tennessee Celebrates Statehood” event begins June 3.

Although “Tennessee Celebrates Statehood” is free and open to the public, reservations are required due to space limitations in the building and on the grounds outside. To make a reservation, please go to: https://tnstatehood2017.eventbrite.com