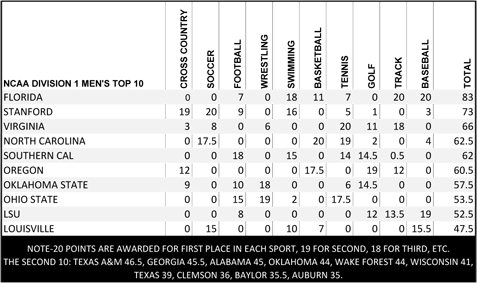 Editor’s note: Knoxville Focus sportswriter Steve Williams originated the National Collegiate All-Sports Rankings in the summer of 1971 when he was sports editor of The Daily Beacon, the University of Tennessee student newspaper. The rankings were picked up by The Associated Press wire service and reprinted in newspapers across the country for years. Colleges also recognized and promoted their athletic programs that ranked among the best in the nation.

Back-to-back national titles in track and baseball at the end of the school year propelled the University of Florida to the National Collegiate All-Sports championship for 2016-17.

The Gators finished with 83 points in the men’s rankings to pass runner-up Stanford, which totaled 73 points. Virginia came in third with 66 points.

“We have many things to celebrate at the University of Florida thanks to the dedication and commitment of our student athletes, coaches and staff along with the tremendous support from our loyal fans,” said Florida Athletic Director Scott Stricklin. “It is certainly great to be a Florida Gator.”

The rankings are based on the 10 sports that have the most participating teams. These sports are basketball, cross country, golf, baseball, track (outdoor), tennis, football, soccer, swimming and wrestling.

The top 20 teams in each sport score in the rankings, with first place collecting 20 points, second place 19, third place 18, etc.

In soccer, the top four finishing teams in the NCAA tournament are supplemented by the next 16 top teams in the NSCAA coaches’ rankings.

With a playoff now in football, the champion and runner-up teams earn 20 and 19 points, respectively, with the remaining 18 teams taken from The Associated Press’ final poll after the title game.

In basketball, the results of the Final Four are supplemented by the next 16 highest ranked teams in the USA TODAY final coaches’ poll.

Tennis’ top four teams come from NCAA tourney play and the remaining 16 from the ITA rankings.

College World Series play produces the top eight teams in baseball, with the remaining 12 teams taken from Collegiate Baseball News’ final poll after the dust has settled in Omaha.

In addition to its two national crowns, Florida had a third-place showing in swimming and diving that netted 18 points and a 10th place ranking in basketball for 11 points. The Gators also tallied seven points each in football and tennis.

Stanford started strong with a national runner-up finish in cross country and a soccer championship in December. The Cardinal would tally in six more sports but a fifth-place showing in swimming was its only other top 10 finish.

Virginia’s outstanding year was highlighted by a national title in tennis, third place in track and field and 10th place in golf.

North Carolina cut down the net in basketball, was runner-up in tennis and shared third place in soccer.

Southern Cal got 18 points for finishing third in the final AP football poll — its biggest point-getter.

Overall, the battle for the National Collegiate All-Sports championship was tight, as only 22.5 points separated Florida from Oregon, the sixth-place finisher.

Northern Arizona’s cross country team earned the first championship of the school year last November. Other team champions in the 10 sports were Clemson in football, Penn State in wrestling, Texas in swimming and diving, and Oklahoma in golf.

Going into the final two sports’ championship events in June, Stanford held the lead with 70 points and Southern Cal was second with 61.5. Florida was back in the pack with 43 points, but not for long.

VOLS’ OUTPUT: Tennessee totaled 14.5 points in the rankings, getting one point from a 20th place showing in swimming and diving and 13.5 points for tying for seventh place in track and field.

Also in addition to the six SEC members that placed in the Top 20 in the rankings, Arkansas scored 33 points, Kentucky 26, South Carolina 23.5, Vanderbilt 23.5, Ole Miss 23 and Mississippi State 11. Missouri was the only SEC school that did not tally.