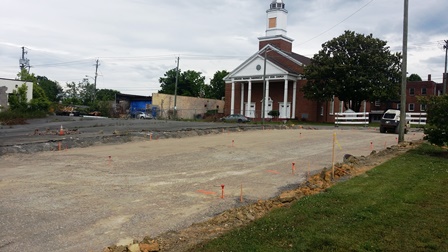 A short East Knoxville street is getting some long-awaited improvements as Knoxville Area Transit’s east Superstop location – Kirkwood Street – undergoes a significant facelift. Kirkwood Street, which connects Magnolia Avenue with Martin Luther King, Jr. Avenue near Chilhowee Park, is getting a new concrete roadway, new sidewalks, security cameras, and new, larger bus shelters to accommodate passengers on the three bus routes that make connections in that location: Route 31- Magnolia, Route 33 – MLK, and Route 34 – Burlington.
“We are thrilled to see this work started,” says Dawn Distler, the City of Knoxville’s Director of Transit. “The improvements to this location will make a big difference to our passenger experience. Buses meet on Kirkwood and passengers can transfer between them – either immediately or with a short wait. This allows residents on a neighborhood connector route like Route 34 – Burlington, for example, to transfer to a bus going to Wal Mart or Knoxville Center mall quickly and easily.”
KAT’s last route restructure in 2010 incorporated the idea of Superstops – locations outside of downtown where connections could be made between routes in comfort and convenience, reducing the trip time of many passengers significantly. Currently, KAT Superstops exist in Fountain City (North), on Walbrook Drive (West), and at Kirkwood Street (East). Future plans call for a Superstop in South Knoxville as well.
The bid awarded by City Engineering for the work totals $127,368.00. KAT will be supplying the bus shelters in addition to this amount, and the security cameras are also an additional project. Work will continue for the next several weeks and current plans are for the new Kirkwood Superstop to be formally opened in July as part of KAT’s Try Transit Week activities.