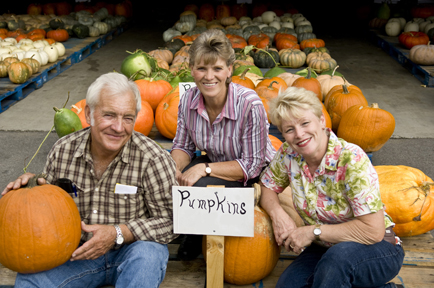 Farms and farmers markets across Tennessee are filled with irresistible autumn décor, much of which is delicious. Choosing edible pumpkins and hard squashes helps make the most of autumn produce purchases.

Most pumpkins are edible, but don’t try to use a pumpkin as a lantern one day and then use it for cooking the next. Pumpkin should be cooked the day it’s cut. Hybrids developed for carving are typically bland or have little flesh. Hybrid Halloween varieties tend to be bright orange and uniform in size, with thick, dark green stems. Their shells are easy to pierce and the flesh inside will be thin compared to a true pumpkin.

The seeds of every pumpkin are edible and quite nutritious. Seeds produced by a hybrid pumpkin won’t make more pumpkins if planted, so there’s no better way to use them than as a crunchy, nutritious snack.

Edible pumpkins often have a flattened or irregular shape, and come in wider variety of muted or mixed colors. The Jarrahdale pumpkin is a blue, medium sized, somewhat flattened fruit.  An heirloom French variety called Rouge Vif d’Etampes, known as the Cinderella pumpkin, is flattened and deeply ridged, with an almost neon red-to-pink and orange color. Sugar and New England Pie are small heirloom varieties used in kitchens during the colonial times.

The Cushaw, or sweet potato pumpkin, is actually a squash. Striped in green or gold and shaped like a curvy gourd, it is famous for its unmistakable pumpkin flavor. Most winter squash, including Butternut, Acorn, Carnival, Hubbard, Kabocha and Red Kuri are as delicious as they are beautiful. A basic rule of thumb is that any produce found in a grocery store produce section is intended for consumption.