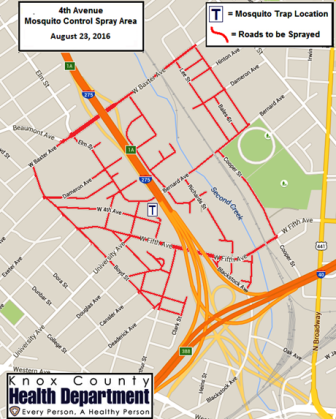 The latest lab report has confirmed the presence of West Nile virus (WNV) in Culex mosquitoes in the Fourth Avenue area of Knox County. Following Centers for Disease Control and Prevention (CDC) protocol, the Knox County Health Department (KCHD) will spray for mosquitoes in this area of North Knoxville on Tuesday, Aug. 23 between 9 p.m. and midnight, weather permitting, to reduce the Culex mosquito population and the risk of WNV spreading to humans. Signs will be posted in the affected neighborhoods to alert residents, who are asked to stay inside during spraying and keep pets inside or in the backyard. The spray area is detailed below, maps are also included.

“I know we’ve talked a lot about Zika and the Aedes mosquito this summer, but it’s important for the public to remember that mosquitoes can transmit other diseases, such as West Nile or La Crosse encephalitis. And unlike Zika, mosquitoes in Tennessee are known carriers of these other diseases,” said Vector Control Supervisor Andrea Woodard. “Regardless of the disease, the public can help reduce all mosquito-borne illnesses by wearing repellent and removing standing water from their property.”

To address the public health concerns caused by mosquitoes, KCHD conducts a West Nile Virus control program during the summer and fall months. As the weather warms each spring, public health professionals begin a weekly process of trapping and testing mosquitoes for WNV, a mosquito-borne disease which can infect humans, horses and birds. From March until the first frost, KCHD also uses larvicides in areas with standing water to prevent mosquito proliferation. These efforts are in addition to KCHD’s work this summer to assess, monitor and control for Zika Virus disease. More information is available by calling 865-215-5093 or visiting www.knoxcounty.org/health.