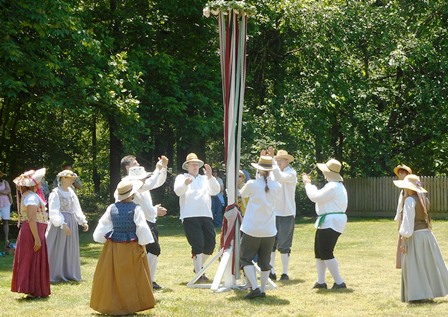 When Historic Rugby returns to its roots, it sure sounds good.

A seventh-generation ballad singer, storyteller, and claw-hammer banjo player, Sheila Kay Adams was born and raised in the Sodom Laurel community of Madison County, North Carolina, an area renowned for its unbroken tradition of unaccompanied singing of traditional southern Appalachian ballads that dates back to the early Scots/Irish and English Settlers in the mid-17th century.

In addition to ballad singing, Adams is an accomplished claw hammer-style banjo player and storyteller. She began performing in public in her teens and, throughout her career she has performed at festivals, events, music camps, and workshops around this country and the United Kingdom. Other performances include the acclaimed International Storytelling Festival in Jonesborough, Tennessee as well as the 1976 and 2003 Smithsonian Folklife Festival as part of The Bicentennial Celebration and Appalachia: Heritage and Harmony.

Festival Offers Something For Everyone

Performers will be featured throughout the village. Venues include:

Food vendors and Harrow Road Cafe will provide food and drink for everyone, with fares ranging from festival favorites to traditional British dishes. Wine and ales are also available.

There’s plenty to do even before the performances begin. Start with a hike along one of Rugby’s numerous trails (the Village is located adjacent to Big South Fork Recreational Area; there’s even a ranger station on site) to view Mountain Laurel in bloom, along with scores of other spring flowers.  Or learn the unique history of Rugby, with a tour of the historic buildings and homes (including one of the nation’s oldest operating libraries) and visits to Rugby’s fascinating shops.

Festival tickets are $12 for daytime performances (which includes the Historic Rugby tour), $8 for the evening concert only, or a combined ticket price of $17 for both. Ticket revenue supports artist fees and also helps Historic Rugby maintain and staff the Visitor Centre and Rebecca Johnson Theatre. Tickets can be purchase in advance online at www.historicrugby.org or onsite the day of the festival.

Rugby was founded in 1880 with the goal of building a strong agricultural community through cooperative enterprise, while maintaining a cultured, Christian lifestyle, free of the rigid class distinctions that prevailed in Britain at the time. The village has continued for 135 years, with numerous original buildings either restored or recreated. Learn more about the history of Rugby and its unique attractions at www.historicrugby.org.

Historic Rugby, Inc., the non-profit that oversees preservation and education in the village, is celebrating its 50th Anniversary in 2016.