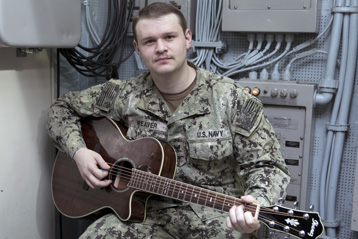 5TH FLEET AREA OF OPERATION (NNS) — Natives of Tennessee are no strangers to the sounds of music and Knoxville raised, Derrick Weaver, is no different.

The soon to be 23-year-old picked up playing guitar after being inspired by his father who plays semi-professionally.

“[My father] said playing guitar is something you are born with so either learn guitar or sink,” reflected Weaver. “I learned.”

(IT) 3rd Class in the U.S. Navy and is attached to Tactical Air Control Squadron (TACRON) 21 currently deployed with the amphibious assault ship USS Bataan (LHD 5).

It is the keys of a keyboard that rule this side of life as he provides information technology support and troubleshooting capabilities for aircraft and flight operations.

Weaver is described as “one of a kind” by his command, but for Weaver wearing the uniform is just another family tradition.

“I can’t say I pictured myself where I’m at today, but I don’t regret it,”

said Weaver. “I’m rich with pride in my service.”

Still strumming some unknown melodies on his guitar, Weaver reflects on his future, “I chose IT because they can go anywhere and do anything, plus it pays well in the civilian world.”

Explaining that he writes his own songs, indicating the unknown melodies he continues to draw out his guitar, Weaver remarked that he plans to build a studio in his future house so he can produce and play his music.

“He is a very colorful individual and brings morale to everyone,” concluded Eskandari as Weaver begins to pack away his guitar and return to work.