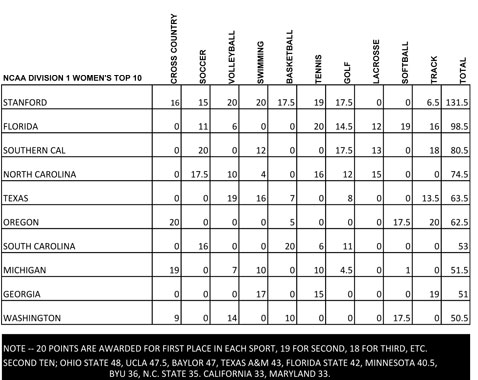 Editor’s note: Knoxville Focus sportswriter Steve Williams originated the National Collegiate All-Sports Rankings for men in 1971 and added the women’s rankings in 1985. Both were recognized as measuring sticks for the nation’s best overall athletics programs for years.

Stanford was a runaway winner if there ever was one in the 2016-17 National Collegiate All-Sports Rankings for women.

In the first six sports of the school year that are used for the rankings, the Cardinal finished no lower than sixth place on the national level and celebrated championships in volleyball and swimming before coasting in with a whopping 131.5 points.

It is believed to be the highest point total by an NCAA Division 1 athletics program in the history of the rankings for men or women.

Florida made a strong showing over the second half of the year, including a national title in tennis, and totaled 98.5 points.

Southern Cal captured the soccer crown in December and finished with 80.5 points for third place. Rounding out the top five were North Carolina with 74.5 points and Texas with 63.5 points.

Florida outscored Stanford 83 to 73 to win the men’s rankings this year.

As in the men’s rankings, the 10 NCAA Division 1 sports that have the most schools participating are used to rank the women’s programs.

The top 20 teams in each sport earn points in the rankings, with first place earning 20 points, second place 19, etc.

The softball rankings are based on the results of the eight teams’ finish in the NCAA tourney in Oklahoma City, with the remaining 12 teams taken from the USA TODAY/ NFCA Coaches’ final poll.

Stanford started with a fifth place finish in cross country and the No. 6 ranking in soccer before winning back-to-back titles in volleyball and swimming. The Cardinal then reached the Final Four in basketball before falling to eventual champion South Carolina.

After taking second-place honors in tennis, the Cardinal advanced to the semifinals in golf before bowing to eventual champion Arizona State in match play.

Stanford’s share of third place in golf upped its total to 125 points in the National Collegiate All-Sports Rankings and a comfortable 65.5-point lead over North Carolina, which was in second place with three sports to go.

The only two sports Stanford didn’t score in were lacrosse and softball. The Cardinal finished in a four-way tie for 13th place in track for its final 6.5 points.

Florida tallied 81.5 points over the final five sports to charge into second place in the rankings.

Oregon started and ended the year with national titles in cross country and track and totaled 62.5 points for sixth place in the rankings.

Other national champions for the 10 sports were Maryland in lacrosse and Oklahoma in softball.

LADY VOLS AND SEC: In addition to Florida, seventh-place South Carolina (53 points) and ninth-place Georgia (51 points) represented the SEC in the Top 10. Texas A&M was 14th with 43 points.

The Lady Vols’ points came from their 11th place ranking in softball.