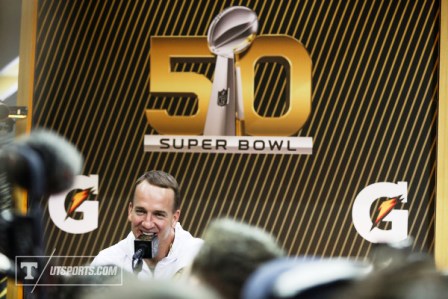 SAN JOSE, Calif. — It’s Super Bowl 50 week and what were the Denver Broncos listening to?

As a group of Broncos offensive players bused to a pre-Super Bowl dinner earlier this week, the famous Tennessee anthem came over the speakers.

“Wish that I was on ol’ Rocky Top, down in the Tennessee hills,” punter Britton Colquitt sang to members of the media at NFL Opening Night as he recalled the ride to a downtown restaurant. “Strangers ain’t come down from Rocky Top, reckon they never will …”

And who was dancing to the famed tune, the ultimate Volunteer himself, Peyton Manning, of course.

“(Peyton’s) up dancing, and I’m dancing,” said Colquitt. “Everybody’s laughing and having a good time. It’s nice to hear. It’s a good one.”

Tennessee’s presence is everywhere as the Broncos prepare to take on the Carolina Panthers in Super Bowl 50 on Sunday evening. With four Volunteers in the game, Tennessee leads all SEC schools and is second in the nation as the most-represented program on Super Bowl rosters.

Colquitt and Manning are joined by teammate Malik Jackson, who has made a major impact at defensive end with Denver.

“It’s fun having Colquitt and Malik,” Manning said. “All of us love Tennessee, and we really appreciate all the support we’ve received from folks in Tennessee.”

On the opposite sideline, Carolina offensive lineman Chris Scott will suit up in #79 in the black and silver for the Panthers.

The quartet of Vols cherished their time in Knoxville and speak fondly of the mentoring and guidance they received to position them for professional careers.

“Tennessee gave me so much, so when I go out there on the field, I just want to show who I am as far as a Tennessee Vol, and what they’ve taught me,” said Jackson. “You know, how to grow and how to be a person in the community. VFL means everything. It’s all about the Vols. I just love representing.”

For the 24th time in 25 years at least one Vol is playing in the Super Bowl, a sign of Tennessee’s standard for producing NFL-quality players.

“It’s obvious, Tennessee’s always put out great talent,” said Colquitt. “I’m just honored to be on a list of people that went there. To be in the Super Bowl, it’s amazing. I’m sure there’s going to be a lot more of them coming out of there.”

Super Bowl 50 marks the seventh consecutive Super Bowl where at least two VFLs are in the game and where each team has at least one former Vol.

“We’re always going to keep (having) some guys in the Super Bowl,” said Scott, who is participating in his second Super Bowl, as he was on the Pittsburgh Steelers’ roster in 2011 for Super Bowl XLV. “It always seems like it’s at least one every year. This year’s no different.”

Scott doesn’t hide his feelings for Tennessee and what his time on The Hill meant to him.

“I love it. I’m a Vol For Life,” he said. “It was an amazing experience. I got to meet a lot of good people. There’s really no place like Rocky Top. I loved it. I go back there often, and it feels good to say I went to school there.”

Tennessee’s success in 2015, winning the final six games, culminating with a dominant 45-6 win over Northwestern in the Outback Bowl was a point of pride for the Super Bowl Vols, who keep close tabs on Butch Jones and the current Volunteers.

“Proud of the Vols,” said Manning. “Proud of Butch Jones and the job that he has done there in the short time that he’s been there. Butch loves Tennessee, that’s why I like him. He loves the Tennessee Vols. Great bowl win over Northwestern.

“I’m fired up for them next year. … (I’m) proud of the job that Josh Dobbs and all those guys did this year.”

Jones has connected with the VFLs and made them feel welcome since his arrival prior to the 2013 season. They value Jones’ priority placed on what it means to be a Vol

“Butch Jones treats NFL guys or ex-Vols really good,” said Colquitt. “He makes a point of that in reaching out, and it’s great. It’s kind of a family away from home.”

“I love Coach Fulmer, he’s like a second father to me. I think that what they’ve done, how Butch is, is very similar, kind of bringing back the traditions of Tennessee. I know he and Fulmer have talked and are friends. It’s just great. It’s an honor to be a part of it.”

Jackson, who began his college career at USC, is passionate about what Tennessee means to him after transferring to the Vols in 2010.

As Manning said, “Still one of the best songs out there.”

No one in Vol Nation would disagree with Peyton would they?

In addition to the four former Vols in the Super Bowl, two members of the Broncos were mentored by members of the Tennessee coaching staff and credit those coaches for aiding them on their paths where they will play on Sunday — Super Bowl 50.

Butch Jones and Steve Stripling coached Denver defensive end Derek Wolfe during his career at the University of Cincinnati. Wolfe said he talks to Jones `all the time’ and his former head coach sends him messages regularly, showing the connection they developed.

“He’ll just send me things that I’m like, `Yeah, I needed that. Thanks Coach,’ ” said Wolfe. “He’s such a great motivator. If everybody buys into what he’s saying, then there’s no reason that Tennessee won’t be at the top.”

From a technical standpoint, Wolfe said Stripling’s impact has been ever-lasting

“I still use techniques that Coach Strip taught me,” said Wolfe. “I have probably the best defensive line coach in the NFL (Bill Kollar) right now, but I still use some things that (Stripling) taught me. My get-off, all that stuff, that’s all stuff that he taught me.”

Wolfe says Jones and Stripling know what it takes to help players reach their dream of playing in the NFL and they make that clear from the very beginning.

One of the newest members of the Tennessee coaching staff also played an instrumental role in the life of another Super Bowl Bronco, cornerback Kayvon Webster. Larry Scott recruited the Miami native to the University of South Florida, as he selected the Tampa-based Bulls over offers from Miami, Auburn and Florida in 2009.

“Coach Scott was really big in my recruiting process,” said Webster, who was a third-round pick of the Broncos in 2013. “I could’ve went to a lot of other bigger schools than USF. It’s just about how he sold it to me.

“I think Coach Scott is different from a lot of people. He has a way, he can make you feel like family. He really is a real, genuine dude. He actually cares about the players that he recruits, and he want to build them. That’s why I went to USF. He was very influential in my decision.”

Similar to Wolfe, Webster said Scott still keeps in touch even though he’s made the move to Tennessee.