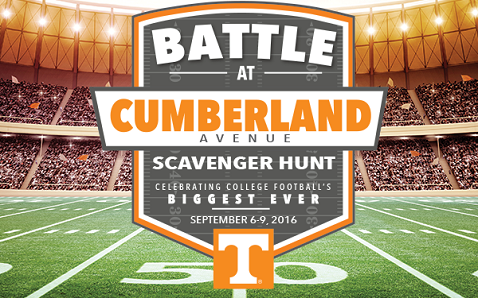 During the much-ballyhooed Battle at Bristol on Sept. 10, the University of Tennessee Vols will be taking on Virginia Tech at a neutral site midway between the schools. More than 150,000 seats were presold last spring, creating the largest crowd to ever watch a college football game.

Closer to Neyland Stadium, anticipate Big Orange fervor up and down the Cumberland Avenue Corridor during the four days leading up to what’s simply being called the “Biggest Ever.”

The Cumberland Avenue Merchants Association (CAMA) is offering the “Battle at Cumberland Avenue Scavenger Hunt – Celebrating College Football’s Biggest Ever.” And what a scavenger hunt it will be – big rewards for creativity, and big prizes worth thousands of dollars.

To get started, teams must register at www.CumberlandConnect.com. Pre-registered teams will receive the list of scavenger hunt items at 5 p.m. on Monday, Sept. 5. The “hunt” – from 8 a.m. Tuesday, Sept. 6, through 10 p.m. Friday, Sept. 9 – actually involves teams posting to social media a series of photos involving Cumberland merchants and fun and campy happenings on The Strip that week.

While the list will be kept secret until the event kicks off, here are a few hints: Not surprisingly, there will be many renditions of “Rocky Top” being sung. But the trick will be how and where. Also, be prepared to be surprised. Doing a good deed for a stranger, or demonstrating your skill with performing arts, also could win bonus points. Interesting facial hair can be a plus. So can indulging in interesting Cumberland Avenue food items. The first-place prize is two bicycles from Regions Bank ($500 value) and $2,000 in merchant gift cards. Runners-up gift packages are valued at $1,500 and $1,000.