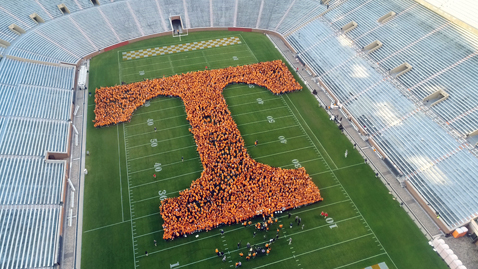 With more than 3,100 students, about 700 faculty, staff and retirees, about 400 alumni and one bluetick coonhound, the University of Tennessee, Knoxville, this morning set the GUINNESS WORLD RECORD title for the largest human letter.

Volunteers stood together to create a Power T that spanned 190 feet by 190 feet, encompassing the majority of Shields-Watkins Field at Neyland Stadium. NBC’s “Today” show viewers witnessed the feat, which was part of Rokerthon 3, weatherman Al Roker’s weeklong trek to five universities to break world records.

“This has been a wonderful opportunity for the nation to see our beautiful campus and share in our Volunteer spirit,” said Chancellor Beverly Davenport. “I am so proud of our students, faculty, staff, retirees, and alumni and extend a big thank you to every Vol who turned out and made this happen.”

As the event drew to a close, “Today” and its partner PurePoint Financial awarded a $5,000 scholarship to a student participant. Davenport presented a second $5,000 one-time award, funded by alumni donations, in honor of the alumni who helped form the T. The scholarship winners were Blaine Ziegler, a sophomore in biological sciences who plans to go to medical school, and Emma Sopcak, a freshman in nutrition.

After arriving in Knoxville on Tuesday afternoon, Roker was greeted at the airport by mascot Smokey and the spirit squad, then rode the UT tour bus to campus. He crisscrossed campus with a group of student leaders, celebrating some of UT’s favorite traditions while marveling at the many Power Ts in the landscape. He crossed the new pedestrian bridge on Phillip Fulmer Way and strolled down Johnson-Ward Pedestrian Walkway. He visited Ayres Hall and listened to chimes playing “Rocky Top” and the “Today” show theme. He saw the Rock being painted and took batting practice as he fired up the Vols baseball team before its shutout victory over Tennessee Tech. Finally, he settled into a room in Stokely Family Residence Hall where resident assistant Quamir Boddie read him a bedtime story and the UT Singers serenaded him with an a cappella version of the alma mater.