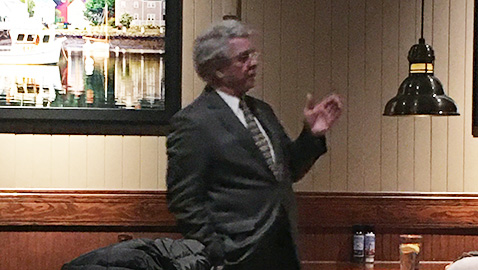 The West Knox Republican Club held their February meeting on Monday night at the Red Lobster on Kingston Pike. Club President Gary Loe allowed for newcomers to introduce themselves and there was a strong welcoming response to all.

Featured candidates were those for Knox County Law Director and Knox County Commission District 4. First, David Buuck, deputy law director, and Cathy Quist Shanks both running for Knox County Law Director addressed the crowd. Mrs. Shanks touted her experience in serving as the sessions and circuit court clerk. She stated that she is running because of too many conflicts. Mr. Buuck highlighted numerous positive improvements that have occurred in the law director’s office to include budget savings and establishing workers’ compensation rights for school teachers. Mr. Buuck asked for the honor to serve as the people’s lawyer.

Other candidates were in attendance and asked for votes and support in the Knox County Primary Election on March 3 with early voting starting Wednesday, February 12, 2020.

Kyle Hixson and Wesley Stone are seeking to be elected to Criminal Court Judge. Kyle Hixson was appointed by Governor Lee to fill the seat in the interim. As former Knox County Deputy District Attorney General, he supervised all criminal prosecutions and personally participated in some of the office’s more complex cases. As a member of Hodges, Doughty, and Carson, PLLC law firm, Wesley Stone has nearly 20 years of trial court experience in municipal, juvenile, general sessions, and criminal courts, providing him extensive knowledge of the criminal code, evidentiary rules, and rules of criminal procedure.

John Whitehead, Knox County Property Assessor, is seeking re-election. Mr. Whitehead has served as property assessor from 2000-2008. After being term-limited, Mr. Whitehead was re-elected in 2016 with the voters valuing his experience. He is currently endorsed by the Knoxville Area Association of Realtors.

John Schoonmaker, Knox County Commissioner for the 5th District which covers deep West Knoxville, came from the meeting of the Knox County Charter Review Committee to ask for support in his re-election efforts. Commissioner Schoonmaker gave an update to some items on the charter review committee’s agenda. Primarily that of a referendum item to change the law director from an elected office to being appointed by the mayor.

Rhonda Lee and Eric Lutton are both seeking to serve as Knox County Public Defender. Mr. Lutton served as deputy public defender before he was appointed by Governor Lee to serve as the Public Defender after Mark Stephens resigned at the end of October. Mr. Lutton started in the community law office in 2013 and has risen through the ranks to now seek election as the public defender. He highlighted his experience and institutional knowledge as his strengths. Ms. Lee has over 19 years’ experience representing indigent individuals with respect and compassion. She was passionate about having more conservative elected office holders and would strive to protect the constitutional rights of the accused.

Knox County Circuit Court Judge Bill Ailor advised the crowd that he had submitted his resume to be considered for the appointment as a Court of Appeals Judge for the Eastern Division. The Governor’s Council for Judicial Appointments will interview applicants in a public hearing then submit three names to Governor Bill Lee to consider.

Additionally asking for support in the appointment process to replace Knoxville City Councilwoman Stephanie Welch was long-time South-Knox resident, Danny Bradley. He serves in law enforcement and has served as a firefighter and as a paramedic. Mr. Bradley would like to extend his passion for serving as the 1st District City Councilman. The council will hear from the candidates and two supporters at the February 20th council meeting. Mr. Bradley asked for letters and phone calls to council members in support of his appointment.