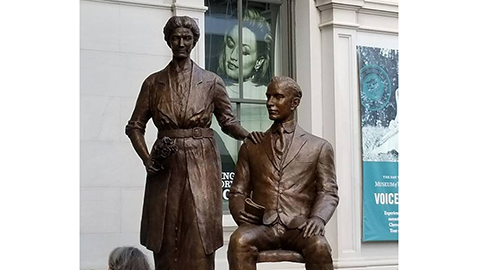 “Dear Son … Hurray and vote for Suffrage and don’t keep them in doubt. I noticed Chandlers’ speech, it was very bitter. I’ve been waiting to see how you stood but have not seen anything yet … Don’t forget to be a good boy and help Mrs. Catt with her ‘Rats.’ Is she the one that put rat in ratification, Ha! No more from mama this time. With lots of love, Mama.”

That was the brief note that a mother passed to her son and her words played a vital part in the ratification of the right to vote for women. The note changed her son’s mind on the issue and his vote not only passed voting rights in Tennessee but also the one vote meant the state was the final and needed vote to ratify the U. S. Constitution.

Phoebe King Ensminger Burn was the lady who wrote the note to her son, Harry Burn, who was a young state representative for his home in Niota, Tennessee. Burn had voiced opposition to the 19th Amendment but, above all, was loyal to his mother.

Phoebe, or Febb, was not a passive woman. She held a degree from U. S. Grant University, now Tennessee Wesleyan University, unusual for women of her day. She was born in 1873 and, upon graduation, married James Lafayette Burn. Together they had four children and her husband was stationmaster at Mouse Creek (Niota) for the East Tennessee, Virginia and Georgia Railway. He was the founder of Crescent Hosiery Mill and associated with the Bank of Niota.

After her husband passed Febb ran the family farm, which she renamed to “Hathburn” for her sons Harry and Thomas and their surname Burn. She was an important influence on all her children’s lives and passed away in 1945.

Febb served as a local school teacher, attended Niota Methodist Church, and was an avid reader. She read three newspapers each day, enjoyed magazines, novels and classic books and was a supporter of suffrage for many years, following those she called “the militants” and other leaders of the women’s movement.

She said she wrote the famous letter to her son while sitting on the porch of her Niota home. The farm and other matters probably were operated from her desk, which last year was donated to the McMinn Living Heritage Museum in Athens. The museum contains more than 10,000 artifacts and is open Tuesday through Saturday starting at 10 a.m. and is located at 522 West Madison Avenue. You can visit the museum online at www.livingheritagemuseum.com.

The museum is currently hosting an antique quilt show through the month of June.

The Burn farm remained in the family and various members of that famous family, including Febb and Harry, are buried in the Niota Cemetery along Highway 11. The Niota railroad depot is said to be the oldest such structure in the state.

Febb Burns was more than just a woman of her times, but a strong influence not only on her children’s lives but the state and the nation as well.