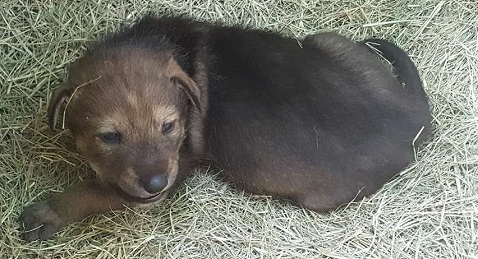 Name will honor his birthright as part of the future of red wolf conservation.

Zoo Knoxville is inviting the community to help choose a name for the first critically endangered red wolf pup born at the zoo in 23 years.

The feisty male, born at the zoo on April 30 to parents Sunny and Saaron, continues to thrive and will soon be venturing out of his den to begin exploring his habitat under the watchful eye of mom and dad.  One of fewer than 300 red wolves in the world, his name will honor his birthright as part of the future of red wolf conservation in North America.

Zoo Knoxville has a special web site set up to accept suggested names, which can be submitted now through Monday, May 30.  After all the names are reviewed, three options will be selected for the community to vote on beginning Tuesday, May 31 through Sunday, June 5.  The winning name will be announced on Monday, June 6.  Names can be submitted online at https://survature.com/s/WdBCLzi4TTKU and through links on the Zoo Knoxville web site at zooknoxville.org or the zoo’s official Facebook page facebook.com/zooknoxville.

Since his birth, staff have been monitoring his health closely with frequent weigh-ins and check-ups with veterinarians from the University of Tennessee College of Veterinary Medicine.  As he approaches his one-month birthday, the pup has his eyes open and is now moving around his den.  He is also growling and barking at his keepers, which is the behavior he should be exhibiting at this stage in his development.  Since he is in good health and being well-cared for by his mother, staff will begin decreasing the amount of contact with the pup and monitor him from a distance to ensure he does not become imprinted on humans and to also avoid upsetting his protective father.

Red wolves are one of the most endangered animals in the world.  They are classified as Critically Endangered by the IUCN Red List of Threatened Species, which is widely recognized as the most comprehensive, objective global approach for evaluating the conservation status of plant and animal species.  There are approximately 200 red wolves living in accredited zoos and breeding facilities in the U.S. and they are managed as part of the Association of Zoos and Aquariums (AZA) Species Survival Plan, which is working to save these animals from extinction.