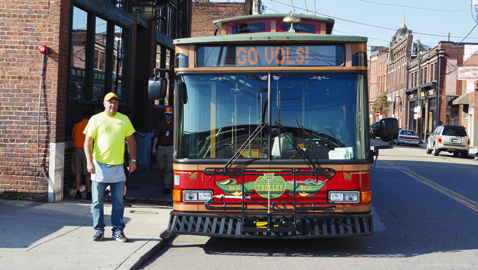 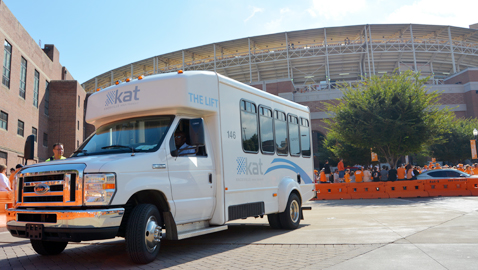 Twenty-six buses, six trolleys, four specialized ADA transport vehicles, and an army of over sixty Knox Area Transit (KAT) employees- that is what it takes to transport tens of thousands of UT football fans on game day from four different locations to Neyland Stadium on KAT Game Day Shuttles. So how do they make it run so smoothly? The Knoxville Focus spent game day with KAT for a closer look.

For a first-hand look at the process, I spent the day shadowing KAT Director of Transportation Services, Rodney Boone. Early in the week before a home game, he holds a roundtable meeting with coordinated departments and addresses employees’ schedules in preparation for Saturday. 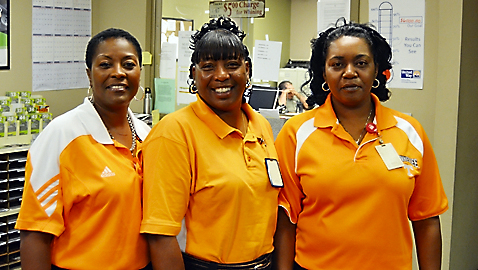 On game day I met Mr. Boone at the KAT bus yard at 8:00 a.m. The first thing I noticed is that the KAT employees are almost like family- smiling and interacting with each other in not just a professional way but also in a friendly, happy way. As the day progressed, I realized that this was a key dynamic to the operation’s success.

According to Mr. Boone, on game day GPS is seldom used for the KAT game day campus shuttle service. He explained that the shuttles do not run according to a schedule because of traffic congestion issues and that routes can change at the last minute due at the direction of police. Operations run smoothly without it. 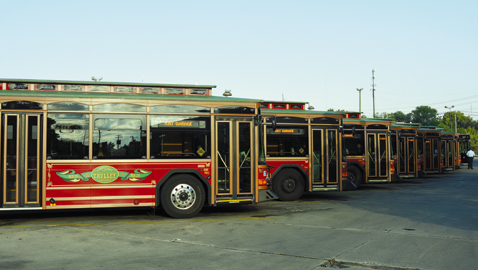 We began our day in the “nerve center.” This is where the employees receive their assignments for the day. We next went to Mr. Boone’s office where he received the latest updates on road closures and information such as weather and other pertinent information for the day.

When we hit the road, our first stop was the parking garage across from the Civic Coliseum. The first thing I noticed was how wristbands were being used to verify passenger payment of $6 for round trip fare.

“When we had tickets we had so many problems. People would lose them during the game or in a rainstorm they would be all wet or hard to find. With the wristbands, we make easy and convenient for everyone,” Boone explained.

The coliseum is the busiest location and requires the largest staff. A key to moving large numbers of people smoothly is to have a line of buses waiting in queue.  The line remained short and everything ran very smoothly.

Next we travelled to the Old City location. This is possibly one of the best locations. With free parking in the city lots under the bridge (look for signs as there are private lots that do charge) and pick up and drop off directly in front of Barley’s Tap and Grill. This also is an excellent location to hang out after the game. If you are not looking to stay around, another great benefit is that this location is close to the interstate and just far enough away from the stadium that it creates probably the easiest exit from a football game.

From the Old City, we travelled to the Market Square/ Krutch Park location. A great advantage to using this location is that when game day is early, the Farmers Market is open. With restaurants and vendors all in one place, this creates an excellent alternative to tailgating in a parking lot.

Before kick off the last place we went was onto the campus itself. I watched as streams of fans poured off the bus in a seamless fashion.

The coordination was flawless. The main key to the success is the laser sharp attention every employee has at this location. With people walking all over and many not paying attention, KAT employees make fans aware of incoming and outgoing buses.

Also, they are very active in assisting fans with a wide range of questions. Most questions I observed focused on locations of buildings.

KAT operations performs an amazing job in a short period of time.  They perform the operation flawlessly. If you are tired of waiting in traffic or spending $20 to park near the stadium, the KAT system is a great alternative.