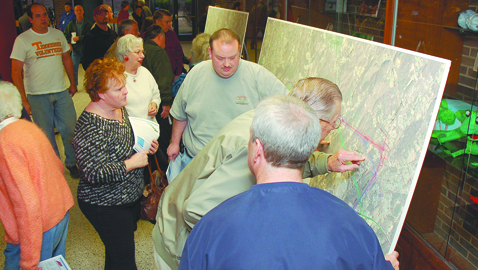 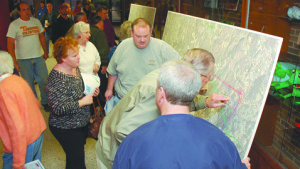 Tensions were high last week when an estimated 600 of South Knox residents, concerned citizens, and elected officials made their way into the auditorium at South Doyle Middle School for TDOT’s public hearing on the James White Parkway Extension Draft Environmental Impact Statement (DEIS).

TDOT revealed plans for a freeway design of the extension rather than a parkway design. A freeway requires a wider right-of-way, but has been determined to be the most efficient road system to move traffic. According to traffic studies completed by TDOT, ¾ of all traffic on this stretch of Chapman Highway is “thru traffic”. However, the design could be changed to a parkway.

TDOT officials also presented an overview of the project, which included new crash data specifically for the stretch of Chapman Highway from the Henley Street Bridge to Fronda Road. From 2007 to 2012, there were 1,235 crashes on this section of Chapman Highway, seven fatalities, and 39 incapacitating injuries. According to TDOT, this is two times greater than other similar roads in Tennessee. Additionally, TDOT claimed that the extension would further serve to improve traffic flow and safety on Martin Mill Pike, Neubert Springs Road, and Sevierville Pike.

Mayor Madeline Rogero, who is a South Knox resident, addressed TDOT and the crowd, “I support the no-build alternative,” said Rogero. “I’ve lived in South Knoxville for 11 years, and I live a half mile from where the current parkway ends. South Knoxville has changed. It’s not a bridge to nowhere anymore.”

Vice Mayor Nick Pavlis, who represents South Knoxville on city council, also spoke to the no-build alternative, but addressed the safety issues on Chapman Highway. “If we can put a man on the moon, we can make Chapman Highway safer,” he stated.

While proponents of the extension had not been incredibly vocal, it was evident from the crowd’s response that the audience was clearly divided on the issue. Both Rogero and Pavlis’ statements were met with a mixture of heckles and cheers.

The Focus previously polled 500 registered voters who reside in the 9th district of Knox County on the issue. 83.63% of those polled supported the extension, with 16.37% opposed. Feedback from the poll was overwhelming. One South Knoxville resident remarked that the poll was skewed by those living in the county, and went so far as to suggest that county residents did not have a stake in the issue.

This issue was quickly put to rest by life-long South Knoxville resident and veteran, Bill Cox, 76, who was among the first to speak during the public input portion of the hearing.

“Freedom is free, but it costs so much,” Cox stated in reference to the tangible and quantitative ‘cost’ of the project. “It’s time to build the road,” he later added.

Proponents of extending the JWP included people who owned property on Sevierville Pike, Kimberlin Heights Road, View Park Drive, Horseshoe Drive, and Decatur Drive. It is interesting to note that several of these residents would be in the path of the proposed extension.

However, opposition to the project remained strong as speaker after speaker expressed their support of the “no build” alternative. Paul James spoke on behalf of Ijams Nature Center, which is against the extension. Mary English also spoke against the extension on behalf of the Knoxville League of Women Voters. There were over 50 members of the Appalachian Mountain Bike Club present who are adamantly opposed to the project.

The hearing, which was originally scheduled from 5:00 p.m. until 7:00 p.m, went for nearly four hours.

TDOT will publish a summary of all the public comments, including those who spoke at the meeting, those who submitted written comments or had their comments recorded, and those who mail in comments. Respondents have until January 4 to submit comments by mail.

TDOT spokesman Mark Nagi reiterated that comments from the public during Thursday’s meeting will be a factor in TDOT’s decision whether or not to pursue the project or select the “no build” option.

A decision is expected from TDOT early next year.