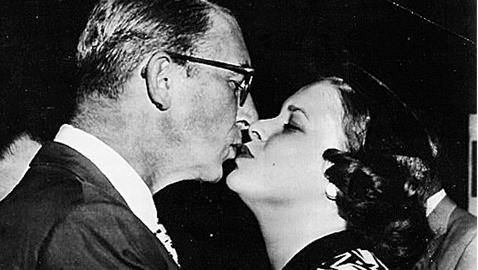 The publicity generated by the Kefauver Committee investigating crime had elevated Tennessee’s Senator Estes Kefauver into the limelight. It was one of the first Congressional hearings to be broadcast live over television and some twenty or thirty million Americans had been glued to their screens to watch a literal rogue’s gallery testify. As often as not, many unhappy witnesses simply rested on their Fifth Amendment rights.

Harry Truman had come to office following the death of President Franklin Delano Roosevelt. The little man from Missouri seemed smaller still while trying on the shoes left empty by FDR. He served nearly all of Roosevelt’s fourth term and to the surprise of everyone save for himself, Truman won a term in his own right in 1948. By 1952, the United States was at war again, fighting a bloody conflict in Korea. Truman’s popularity plummeted even further when he recalled General Douglas MacArthur following the American Caesar’s loose tongue, criticisms of the Truman Administration, and frequent willingness to ignore orders.

Following a visit to his son in the nation’s Capitol, a beaming Cooke Kefauver told eager newsmen that “it looks like his friends are running him.”

It wasn’t long before a Kefauver for President Club was opened in Tennessee. A national headquarters was open before the close of 1951 in Washington’s Willard Hotel. Still, President Truman had not stated his own intentions and he was eligible to run again in 1952. Truman, like Senator McKellar, had been heard referring to Kefauver as “Senator Cowfever”.

Finally Kefauver paid a call on President Truman at the White House and stated the obvious; he was considering running for the Democratic nomination, but pledged he would not run if Truman wished to run again. The President was noncommittal, but Senator Kefauver may have heard what he wished to hear; he thought Truman had given him to go-ahead to run.

Estes Kefauver announced he would be a candidate on January 23, 1952. Almost at once, the national media speculated President Truman’s reaction to Kefauver’s announcement would be anything but warm. The campaign, despite reports to the contrary, was usually strapped for cash. The Kefauver national headquarters quickly departed from the expensive Willard Hotel to the older, run-down, but far less costly Raleigh Hotel.

The Kefauver campaign selected Gael Sullivan as the nominal chairman of the presidential effort. Charles Neese, formerly Kefauver’s Administrative Assistant, was quoted by Kefauver’s biographer Charles Fontenay as describing the selection of Sullivan as “the biggest mistake since the South lost the Civil War.” Sullivan apparently paid little attention to helping Kefauver win delegates to the Democratic convention, despite having extensive contacts throughout the party. Neese said Sullivan was “an egotist who never did get to the hard realities.”

Evidently Charlie Neese counseled Kefauver against running in the New Hampshire primary, but the senator disregarded his advice and campaigned hard in the Granite State. Virtually every respectable Democrat in New Hampshire had already been corralled to run as a delegation supporting President Truman. The president scoffed about presidential primaries and indicated he could easily have the Democratic nomination in the event he wanted it. Truman considered having his name removed from the ballot, but New Hampshire Democrats squalled they might lose the state organization were he to do so. Senator Kefauver was apparently feeling his oats and made a comment that he believed he could defeat the president for the Democratic nomination. Finally, President Truman said he would let his name stay on the ballot.

Kefauver became a familiar sight to New Hampshire residents as he trudged through the snow, offering his hand to one and all. Some reporters clearly thought the tall Tennessean was slightly mad to think he could win in New Hampshire merely from moving from one spot to another and shaking hands with folks. Kefauver would stick out his hand to a startled prospective voter, introduce himself and ask for his or her help. Mrs. Kefauver or a staff member would be nearby, busy writing down the voter’s name so that a letter could be sent out the next day.

The state organization and most of organized labor worked hard for Harry Truman, who was away at his retreat in Key West, Florida, completely unconcerned. Former senator Scott Lucas of Illinois did travel to New Hampshire to make a couple of speeches on behalf of Truman.

The conventional wisdom was that President Truman would easily prevail, perhaps by as much as a 3-1 margin. Senator Kefauver, as is usually the case with candidates, forecast victory. Kefauver was right and he won fifty-five percent of the vote, stunning the nation and most professional political prognosticators.

Harry Truman soon made official his intention to retire at the end of his term.

Estes Kefauver went onto Wisconsin and Nebraska, repeating his personal campaign style in both states. He crushed his opposition in Wisconsin and faced Oklahoma U. S. senator Robert Kerr in Nebraska. Kerr charged Kefauver was the beneficiary of ample campaign funds spent on his behalf in the Cornhusker State and Kefauver retorted the millionaire Kerr was the pawn of “vested interests”, namely oil and gas. Tennessee’s governor, Gordon Browning, left Nashville to campaign for his friend Estes Kefauver in Nebraska. Browning was facing a serious challenge to his own reelection from young Frank Clement and his support for Kefauver would cause him serious political problems at home before the contest was over.

Kefauver won in Nebraska, as well as Massachusetts, New Jersey, Maryland and Pennsylvania, but oftentimes the primaries did not bind the delegates to support the winner of the primary. While Estes Kefauver was winning primaries, state nominating conventions were being held in other states and the Kefauver campaign had done little or nothing to win delegates in those contests. After winning nine primary contests, Kefauver had tallied 1,253,578 votes while all of his opponents combined totaled only about 327,000 votes. Yet despite the flood of votes he had won, Kefauver only had 54 delegates pledged to vote for him at the convention.

Senator Kefauver entered yet another primary against the advice of his staff and friends, running in Florida where he faced the formidable Richard Russell. Russell represented Georgia in the United States Senate and was well known in Florida and one of the most highly respected figures in Congress.

Like Scott Lucas, Governor Fuller Warren was still smoldering over the Kefauver hearings and would throw the full weight of his administration against the Tennessee senator.

The strategies of the Russell and Kefauver campaigns for the Florida campaign were a bit odd; Kefauver hoped to demonstrate his popularity in the South, while Russell, the acknowledged leader of the Southern bloc in Congress, hoped to demonstrate that his appeal as a presidential candidate was not limited to the South, as Florida was somehow a more metropolitan state.

Every member of Florida’s Congressional delegation hit the campaign trail for Russell and as Senator Kefauver’s advisors had predicted, Governor Warren was strongly for Russell. Governor Herman Talmadge of Georgia visited Florida to stump for Senator Russell where he was popular, especially in the northern part of the state.

Kefauver was endorsed by a single statewide official and had to rely on Illinois Senator Paul Douglas to campaign for him. Former U. S. senator Claude Pepper, defeated in 1950 in a vitriolic campaign and denounced as the “Red Pepper”, campaigned for Kefauver during the last days of the hard fought Florida primary.

The two candidates met in debate on the eve of the election and exchanged verbal blows. Richard Russell won a decisive victory, winning 367,980 votes to Kefauver’s 285,358 votes. Once again, the primary results were non-binding and Estes Kefauver won five out of twenty-four delegates in Florida.

Kefauver went to Ohio where he faced opposition from the Democratic machine in the state. A slate of delegates pledged to favorite son candidate Robert J. Bulkley opposed those pledged to Kefauver. Bulkley was a former member of the United States Senate, having been defeated in 1938 by Robert A. Taft. Senator Kefauver won a smashing victory in Ohio, stunning in its magnitude. Winning 2,209,212 votes against the Bulkley slate’s 1,285,863 votes, quite nearly every well known establishment Democrat in the state went down to defeat at the hands of the Kefauver delegates. Still, the Kefauver campaign had only managed to field 34 delegates, 31 of whom were elected, out of 54 delegate slots.

Estes Kefauver had demonstrated considerable vote-getting ability; certainly more so than any other potential candidate for the Democratic presidential nomination. According to his biographer, Charles Fontenay, Kefauver later mused he should have made a clean break with the Truman administration, as it would have cost him nothing politically.

While the Kefauver campaign operation was quite effective at winning votes, it was down right inept at gathering delegates and only delegates can vote in nominating conventions.

As Estes Kefauver headed for the Democratic National Convention in Chicago, several other candidates loomed in the wings, most notably Vice President Alben W. Barkley and Illinois Governor Adlai Stevenson. Neither had subjected himself to the fire of the primary contests, but both could present a real obstacle to Estes Kefauver actually winning the nomination.

A weary Senator Kefauver had lost weight during his presidential campaign, but told reporters he looked forward to going home to Tennessee and assured them, ”after a few meals of black-eyed peas and Tennessee country ham, I expect to pick up all the weight I’ve lost.”