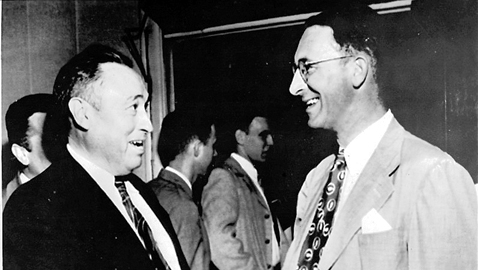 Congressman Estes Kefauver had seriously contemplated challenging Senator Kenneth D. McKellar in 1946.  After exploring the possibility of running against McKellar, Kefauver decided the seventy-seven year old incumbent was still too strong to beat.  Kefauver turned his sights on the seat held by Tennessee’s other senator, Tom Stewart.

Stewart had first been elected in 1938, defeating Senator George L. Berry and Congressman J. Ridley Mitchell for the Democratic nomination.  Stewart had been strongly supported by Senator McKellar and McKellar’ political ally, E. H. Crump, leader of the Shelby County political organization.  The 1938 Democratic primary had been a brutal affair and McKellar and Crump had reestablished their dominance in Tennessee politics.

Senator Stewart had been reelected for a full six-year term in 1942, but was not considered an especially strong candidate by many.  Governor Prentice Cooper had been interested in running against Stewart, but opted to run for reelection after receiving a cool reception from Senator McKellar who preferred to keep his junior colleague.  Stewart was challenged by Edward Ward “Ned” Carmack, son of the U. S. senator of the same name.  Carmack quite nearly beat Stewart, but the returns from Shelby County, where Stewart received a tremendous majority, secured the nomination for the incumbent.  Mr. Crump was appalled that Senator Stewart actually needed the majority from Shelby County to win reelection and his attitude toward Stewart began to subtly change.

Crump was never especially attached to Stewart, who had been selected to run for the United States Senate by McKellar.  Crump, in a petulant mood, had written to excoriate Senator Stewart and threatened to withdraw the support of the Shelby County machine in the next election over a vote Stewart had cast in the Senate.  To McKellar, who had cast an identical vote, all the Memphis Boss had to say was “We were a little surprised by your vote.”

When Kefauver told his father he intended to run for the Senate, Cooke Kefauver strongly advised him not to run.  The elder Kefauver had also originally counseled his son against making his first campaign for Congress and Estes replied, “I’m going to the Senate, or I’m going back to practicing law.”

Crump made the announcement that would end the domination he and Senator McKellar had exerted over Tennessee politics in December of 1947.  The Memphis Boss said he would not back Tom Stewart for reelection.  Crump’s candidate would be John A. Mitchell, an obscure judge from Cookeville whom he had never even met.  Senator McKellar, aging and increasingly ill from a variety of ailments, reluctantly went along with Crump, although he did not think Mitchell could win.  McKellar’s heart was with Stewart and most of his own political organization ignored him and backed Stewart.

Kefauver returned to Nashville to seek the support of Silliman Evans, the publisher of the Tennessean.  Evans could be counted on to oppose both Senator McKellar and Crump and the diminutive publisher promised his support to the Congressman, although he extracted a promise from Kefauver to shake five hundred hands a day during the campaign.  For Kefauver, an exceptionally able one-on-one campaigner, it was an easy promise to make and keep.

Many of Crump’s friends and allies immediately recognized the Memphis Boss was about to make a political mistake of titanic proportions.  Governor Jim McCord made a special trip to Memphis to urge Crump to support Stewart for reelection, but the Boss was adamant.  One of Crump’s lieutenants in Memphis, Will Gerber, had become convinced the amiable Stewart was anti-Semitic and had been constantly whispering in the Memphis Boss’s ear.

Crump likely believed his pronouncement would cause Stewart to meekly retire, but the senator issued his own statement saying he would be a candidate for reelection in 1948.  Senator McKellar broke the news to his junior colleague that he, too, would support Judge Mitchell, and ruefully told the Memphis Boss Stewart had little to do with him following their conversation.

Crump’s decision to abandon Senator Stewart set up a three-way race and divided the support and resources of his own organization and that of McKellar, which gave Congressman Estes Kefauver the opening he needed to run and win.

Kefauver had little name recognition across the state and campaigned hard, shaking hands and making new friends.  Harry Mansfield, once the twelve-year old chubby little boy who had tagged along during Kefauver’s first Congressional campaign became the candidate’s driver in the 1948 Senate race.  According to Kefauver’s biographer, Charles Fontenay, Kefauver “dearly loved his Scotch” and was never without a bottle as he campaigned across Tennessee.  Evidently young Harry discovered the stash of Scotch and helped himself.  After overindulging one evening, Harry found himself literally seized by the ankle and dragged from his bed by an irate Kefauver who snapped, “If you can’t take it, young man, leave it alone.”

Kefauver boldly invaded the domain of Crump and courted support from leading citizens.  The Congressman was in Memphis conferring with supporters when he received a telephone call from his sister who broke the news their mother was mortally ill.  Kefauver hurried to Knoxville and was with Phredonia when she died.

The Kefauver campaign received a jolt when it quietly authorized a poll early in 1948.  The Chattanooga Congressman was running far behind both Senator Stewart and Judge Mitchell.  Kefauver only had the support of 13% of voters, while Stewart had 37% and Judge Mitchell had 21%.

Kefauver opened his campaign in Madisonville and while a poor speaker, he had an enthusiastic crowd from his hometown folks.

Estes Kefauver not only had the support of Silliman Evans and his Nashville Tennessean, but that of Edward Meeman and the Memphis Press Scimitar.  Like Silliman Evans, Meeman had consistently fought the Crump machine in Memphis and the Boss thoroughly hated the editor.  Meeman offered some surprising advice, telling Kefauver he ought not focus his attacks on Crump and his machine, but fight back when the Memphis Boss opened up an assault on the Congressman’s candidacy.

McKellar and Crump’s domination of state politics was further challenged by the return of former governor Gordon Browning, who was running against Jim Nance McCord.  Governor McCord had been highly popular and had enjoyed strong support from McKellar and Crump in 1944 and 1946.  McCord, against the advice of Crump, had supported a sales tax for education, which angered a great many voters who less appreciated free textbooks for students than they hated the new tax.  Crump had predicted McCord would be chased from the state capitol and Browning, humiliated in 1938 and beaten badly, appeared to be a strong candidate.  Many of those supporting Kefauver for the Senate were also backing Browning’s bid to return to the governorship.

Crump was soon dismayed by his own preferred candidate’s performance on the stump.  Judge Mitchell, while a stately-looking man, was not especially adept at meeting voters and his speeches were not much better than Kefauver’s.  Unfortunately for Mitchell, he did not have Kefauver’s personal appeal or warmth.  Crump had apparently never considered McKellar’s political organization would ignore the old senator’s endorsement of Mitchell and the Memphis Boss thought Kefauver and Stewart would divide the vote hostile to the machine, allowing Judge Mitchell to win the Democratic nomination.

Despite his mistake, Mr. Crump was a shrewd observer of people and events.  He soon realized his support for Mitchell might help elect Kefauver and both the Memphis Boss and Senator McKellar were deeply opposed to the Chattanooga Congressman.

Crump made yet another mistake, leading to one of the most famous episodes in Tennessee’s political history.  Enraged by Kefauver’s open campaigning in Memphis, Crump issued a blast from his office through full page newspaper ads all across Tennessee.

“Estes Kefauver Assumes the Role Of A Pet Coon” the headline of the Crump advertisement blared.  The Memphis Boss accused Kefauver of being soft on Communism, if not a fellow traveler.  Crump compared Kefauver’s votes in Congress to those of New York Congressman Vito Marcantonio, who was openly sympathetic to the Communist cause.

Crump’s blast did not cause his prominent supporters in Shelby County to disappear, but it did allow Estes Kefauver to reply, which he did and effectively.  To the horror of some of his campaign staff, Kefauver had found a coonskin cap and readily placed it atop his head during campaign appearances.  Kefauver announced while he might be a “coon”, he was most certainly not Ed Crump’s pet coon.  Soon the Kefauver campaign had a surplus of live raccoons, who appeared at campaign rallies and events.

The gimmick helped the Kefauver campaign immeasurably, giving him favorable publicity all over the state.

Crump was aware his tactic had backfired and reports of Judge Mitchell’s leaden appearances further depressed the Memphis Boss.  Crump began quietly to explore the possibility of dumping Mitchell and supporting Senator Stewart.  The Memphis Boss telephoned J. Frank Hobbs of Lawrenceburg, a former chairman of the Tennessee Democratic Party and strong supporter of Senator McKellar.  His high voice carrying over the long distance wire, Crump wondered if Hobbs would contact Judge Mitchell and ask him to drop out of the race?  Hobbs replied, “I think you ought to be the one to do that, Mr. Crump, if anyone does.”

Judge Mitchell hurried to Memphis to confer with Crump and they enjoyed a friendly conversation and the rumors the Boss might swing his support to Senator Stewart quieted down, at least for a while.

Estes Kefauver was more than a little worried about the possibility Crump might change his mind and support Senator Stewart.  Tom Stewart was also aware of the rumors and had said nothing in his own campaign appearances that would offend the Memphis Boss, leaving the door open for Crump to return to his camp.  Congressman Kefauver kept pressing the senator to denounce Crump, something Stewart refused to do.

The rumors were true and Crump was planning to announce his support for Senator Stewart, but Kefauver cleverly foreclosed that option.  Kefauver beat Crump to the punch and declared the Memphis Boss would be shortly dumping John Mitchell in favor of Tom Stewart.

Crump’s pride was at stake and he angrily replied, “Kefauver knows we never switched, never deserted any political candidate in our political history.”

Kefauver delightedly pointed to the 1930 United States Senate race where Crump had switched sides.  To the Boss’s fury, Congressman Kefauver cited other instances as well.

Kefauver continually pressed his opponents to debate him and the Chattanooga Congressman issued the same invitation to E. H. Crump.  Stewart was a much better speaker than Kefauver and many of his family members believe had he accepted Kefauver’s invitation to debate, he would have demonstrated his knowledge of the issues and demolished the Congressman.  It was probably a mistake that cost Tom Stewart his seat in the United States Senate.

On Election Night, Kefauver jumped into the lead based on the returns from his native East Tennessee.  Judge Mitchell and Senator Stewart were both from Middle Tennessee and divided the vote there, allowing Kefauver to enjoy a 17,000 lead over Senator Stewart.  Kefauver won an impressive vote in Shelby County, but Crump’s decision to support John Mitchell was the decisive factor.  Had Crump thrown his considerable support in Shelby County to Tom Stewart, the senator would have been renominated.  Instead, Senator Stewart only received 2,733 votes in Shelby County.

Estes Kefauver had won a seat in the United States Senate and Gordon Browning had decisively defeated Governor Jim McCord.  Many would credit Kefauver with destroying the power of the Crump machine in statewide elections, but it was Ed Crump himself would accomplished that particular feat.