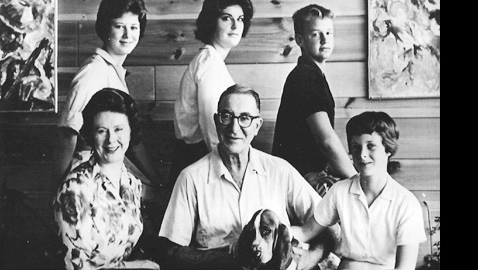 From the author’s personal collection.
Senator Estes Kefauver and family, 1961

Senator Estes Kefauver won a resounding reelection victory in 1960 after facing a bitter primary contest with Judge Andrew “Tip” Taylor.  It was to be his last campaign.

Kefauver never relied on the usual gift of the Southern politician, oratory.  A terrible public speaker, Kefauver was one of those rare politicians who connected on some more personal level with voters.  His ability to win, despite the odds, was remarkable and readily acknowledged by his peers, not the least of whom was Lyndon Baines Johnson.

Kefauver seemed not to be able to make a campaign appearance anywhere without making a gaffe that would have seriously embarrassed and wounded a lesser politician.  Kefauver’s biographer, Charles Fontenay, recounted one such gaffe while Kefauver was campaigning in California.  Kefauver had been introduced by actress Shelley Winters and the Tennessee senator had promptly thanked “my fine friend, the charming and lovely Miss Shelley Williams.”  Kefauver went on and referred to Shelley Winters as ‘Shelley Williams twice more before distraught campaign aides pointed out the glaring error to him.  Kefauver then managed to compound the error with his apology.

“I’ve been calling Miss Winters ‘Miss Williams’, when I know her name very well,” Senator Kefauver told his audience.  “You know, you get confused over names on a campaign like this, and I was thinking about another very old, dear friend of mine, from my own start – – – Tennessee Ernie Williams.”

The reaction of Miss Winters being confused with Tennessee Ernie Williams was not recorded.

Despite Estes Kefauver’s connection to voters, his own wife, Nancy, admitted that her husband was “not an easy person to know.” She also confessed, “He’s great with the mass of people, but not much interested in individuals.”  Yet there were tens of thousands of people who believed they knew Estes Kefauver well and were devoted to him.

Kefauver was also one to be so preoccupied that the small details of every day life eluded him.  Fontenay recalled in is excellent biography of Kefauver an instance where the senator had to keep his hands in his trouser pockets as he had somehow forgotten or lost his belt.  Kefauver also insisted on packing a pair of black shoes whenever he was traveling, but at least once packed two right shoes.

One reason Estes Kefauver connected with people was he had mastered the art of the personal gesture.  Kefauver’s correspondence rivaled that of Senator McKellar whose correspondence with Tennesseans was in excess of the number of residents in the state.  Kefauver sent tens of thousands of Christmas cards annually, giving folks the feeling the senator remembered them during the holiday season.  While not uncommon now, Estes Kefauver was one of the first to send Christmas greetings to so many friends and supporters.  Kefauver would frequently pen a postscript on letters to friends in his own hand.

Always extraordinarily ambitious, following his reelection campaign in 1960 and the election of a Democrat to the White House, Estes Kefauver finally seemed to relinquish his quest to be elected president.  For the first time in his political career, Kefauver had no larger goal in mind and buckled down to the hard work of the United States Senate.  Kefauver’s drive to be elected president had been one of the primary reasons his Senate colleagues resented him, as they felt he was less a workhorse, than a show horse.  Some believed Kefauver was far less interested in the actual work of the Senate than issues and investigations which might generate headlines.  Some senators complained that Kefauver was quick to promise help on issues of importance to them, yet when the Senate roll was called, Kefauver was off campaigning.

Kefauver’s constant campaigning had affected his family life.  The senator was gone so often, his children were surprised when he was home.  After finally seeming to surrender his ambition to be president, one of the happier aspects for his family was that Kefauver was home far more often.

Estes Kefauver clearly loved his children and when home made a point to spend as much time with them as possible.  Kefauver also loved dogs and in spite of their different political affiliations, the Kefauver family got along quite well with that of Vice President Richard Nixon.  Nixon’s famous cocker spaniel, “Checkers,” was discovered to be in a family way and the vice president intimated the father of the puppies was Estes Kefauver’s cocker spaniel, “Jo-Jo.”  When Kefauver discovered Nixon believed the paternity of the puppies was being attributed to his dog, the senator said he didn’t believe Jo-Jo had made any visits to the Nixon household for quite some time.

The Kefauver household was a lively one and the senator’s penchant for inviting anyone and everyone to drop by exasperated his wife.  Yet, the Kefauver home was frequently the site for entertaining.  Two Tennessee friends helped financially, providing additional funds for Kefauver’s personal expenses.

Kefauver was also a product of his time, with a fondness for Scotch, cigarettes and women.  The Tennessee senator made quite a stir while on an official visit to Europe when he arrived at an event accompanied by the city’s most notorious prostitute.  According to Kefauver’s biographer, despite his straying, Henrietta O’Donahue absolutely believed “the only woman he ever really loved was Nancy.”  Ms. O’Donahue claimed, “She was everything to him.”

Nancy Kefauver was not blind to her husband’s weakness and on at least one occasion, a particularly attractive young woman who was employed on her husband’s staff was let go and found another position.

Senator Kefauver’s health began to deteriorate following his 1960 reelection campaign.  Kefauver was a very heavy smoker and despite having tried to quit smoking several times, continued to smoke for the rest of his life.  Kefauver undermined his efforts to stop smoking by asking others for a cigarette.  Senator Kefauver eventually suffered from high blood pressure and his heavy smoking and drinking helped him not at all.  Kefauver’s biographer, Charles Fontenay, describes the senator as “considerably more than a moderate drinker.”  Evidently Senator Kefauver could hold his liquor and drink most of the day without suffering any obvious impairment.  Still, Fontenay wrote that Kefauver “as he grew older he sometimes swam in a mild alcoholic haze.”

The last year of his life, Estes Kefauver did not slow down his activities, but his wife recalled it was a very happy time for the family, remembering, “It was as if that last year, Estes knew he had to wrap things up.”

An inveterate letter-writer, it was appropriate his very last letter was to his daughter Lynda, who was working on a cruise ship in the Caribbean.  Kefauver closed his letter, “We are thinking of you and love you.”

Kefauver took the little subway from the Senate Office Building to the Capitol and went to the floor of the Senate.  There he, along with senatorial allies, led a filibuster against legislation he had sponsored with Senator Wayne Morse of Oregon.  During the course of the Senate debate, Kefauver went especially pale.  Senator Frank Lausche of Ohio asked the Tennessean if he was all right.  Kefauver sat down at his desk and complained his stomach was hurting.  Senator Joseph Clark of Pennsylvania begged Kefauver to leave and get medical attention.  Kefauver refused, insisting he was needed in the Senate.  Finally, Kefauver’s discomfort became so intense he decided he needed to leave the floor of the Senate.

He then spoke what would be his last words inside the United States Senate.

Senator Kefauver reminded Majority Leader Mike Mansfield of Montana that he had requested a vote on his bill.  “I spoke to the Majority Leader about having a yea-and-nay vote on the amendment,” Kefauver said.

Kefauver, instead of going to see a doctor, went to the office of the Senate’s Sergeant-At-Arms.  He was given some pills for indigestion and had a drink.  Kefauver’s Administrative Assistant, Charles Caldwell, urged that the senator go to the doctor, but Kefauver insisted he was merely suffering from heartburn having eaten Mexican food the night before.  Finally Caldwell was successful in convincing Senator Kefauver to go to Bethesda Naval Hospital.  A secretary intended to drive Kefauver to the hospital, but the senator refused to go and decided to go home instead.  Once home, he made himself as comfortable as possible and had a bowl of soup.  Unfortunately, Senator Kefauver could not make himself quite comfortable.  By the time Kefauver arrived at Bethesda, the doctors had left for the night.

It was the next day when doctors determined Senator Kefauver had experienced what they described as a “mild” heart attack.  The physicians decided the senator needed extended bed rest, but Kefauver was displaying other symptoms, which caused the doctors to change their diagnosis.  According to Kefauver’s biographer, the senator was afflicted with a “dissecting aneurism of the wall of the ascending aorta”.  The main artery to Senator Kefauver’s heart was dangerously enlarged.  It was determined Estes Kefauver needed immediate open heart surgery.

Charles Caldwell telephoned Nancy Kefauver who was in Sedalia, Colorado with two of the Kefauver daughters visiting friends.  Mrs. Kefauver instantly insisted Caldwell find the finest heart surgeon in the country for her husband.  The best surgeon Caldwell could find was making a speech in Toledo, Ohio but was flown back to Washington by the Air Force.  Even with heart surgery, doctors believed Kefauver had a small chance for survival.  Senator Kefauver refused to have the operation until his wife arrived back from Colorado.  He demanded the surgery take place the next morning, allowing time for Nancy to arrive at the Capitol.

At 3:33 a.m. that morning, Senator Kefauver’s aorta burst and he passed away quietly.  He was only sixty years old.

By the time Nancy Kefauver reached Bethesda Naval Hospital, the senator had been gone for almost an hour.  She later said she sensed the moment she had lost her husband.

Estes Kefauver’s earthly remains were taken home to Madisonville, Tennessee.  Vice President Lyndon Johnson led a delegation of some thirty-one Congressmen and senators.  Senator Kefauver’s coffin rested on the front porch of his Aunt Lottie’s house, while his widow sat beside it in dignified silence.  Estes Kefauver’s coffin was then carried by Air Force servicemen through the field adjoining the house to be lowered into the fertile Tennessee soil.  It began to rain and Nancy Kefauver and her children slowly walked back to the house.

Some of the nation’s most important personages mingled with people like my grandmother that day.  She was there to pay her last respects to a man she had liked and admired, yet throughout her life I cannot recall her being especially interested in either politics or politicians.  Hailing from Madisonville herself, she thought of Estes Kefauver as a friend, just as did tens of thousands of other Tennesseans.  He really was a man of the “people” and the greatest campaigner of them all.