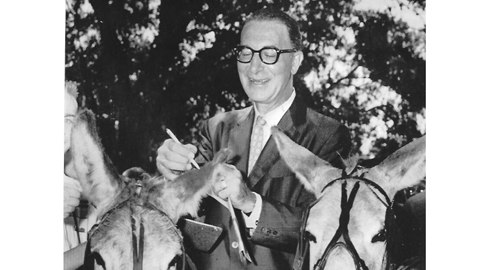 Tennessee’s Estes Kefauver had won more primaries and votes than any other contender for the 1952 Democratic presidential nomination, yet he journeyed to Chicago uncertain of the outcome. One thing was certainly clear: he was bitterly opposed by President Harry Truman and most of the party professionals. Senator Richard Russell of Georgia was a regional candidate and would never receive serious consideration outside the South. W. Averill Harriman of New York was immensely wealthy, but largely unknown to the public, despite having served in numerous posts for Franklin D. Roosevelt. The seeming inability for the Democratic Party to find an alternative caused Vice President Alben W. Barkley’s heart to beat a little faster. The old warhorse of the national Democratic Party, Barkley had served as a Congressman and senator from Kentucky for decades before being selected by Harry Truman as his running mate in 1948. Barkley had spoken virtually everywhere in the country and when the widower married a much younger woman, people were less appalled than captivated by the vice president’s romance and youthful spirit. The reality was that Barkley was seventy-four years old, stout and his eyesight was rapidly failing. Barkley had longed to be president and he announced he would be a candidate before arriving in Chicago.

To demonstrate his physical fitness, Barkley marched down the street at the head of a procession to his hotel. The Barkley candidacy died almost as quickly as it was born. Labor leaders objected to Barkley due to his advanced age and the vice president withdrew.

Governor Adlai Stevenson, as the official host to his fellow Democrats, appeared to welcome the delegates and received an enthusiastic ovation. Kefauver warned that party bosses were working behind the scenes to nominate Stevenson, although the governor waited until the very last minute to finally agree that if he were offered the nomination, he would not refuse it.

The Kefauver forces made an alliance with those of Averill Harriman and both were determined not to seat delegations from Texas and Mississippi. The Texas delegation was lead by Governor Allan Shivers and strongly favored the doctrine of states’ rights. There was also a big question as to whether the Texas governor would support any Democratic nominee over Dwight Eisenhower.

According to his biographer, Charles Fontenay, Senator Kefauver met secretly with Governor Shivers. The Texan wanted to know if the Tennessean, should he be elected president, supported the tidelands legislation. That particular legislation would give states along the coastal United States title to oil reserves beneath the ocean’s waters along the shores. If he could not support the tidelands legislation, Shivers wondered if Kefauver would agree to simply allow the Congress to decide the issue?

Kefauver told the governor he had not changed his position, which was that he favored federal ownership of the oil reserves off the coastal United States. His answer left Kefauver with no hope of having the support of the large Texas delegation. Governor Shivers when speaking to the gathered Lone Star delegation later had nothing kind to say about Estes Kefauver.

The seating of the delegations from Mississippi and Texas became a thorny issue for the convention and Senator Blair Moody of Michigan unleashed all Hell when he offered an amendment to Kefauver’s “Fair Play” rule. Senator Kefauver, watching the convention proceedings from the comfort of his hotel suite, was shocked to see there had been no agreement between the delegates on Moody’s amendment and it was quite clear Southern delegates were enraged.

Tennessee’s Governor Gordon Browning, doing all he could to help Kefauver, had spoken in favor of the amendment, which carried over the fierce opposition of the Southern states.

Three Southern states – – – Virginia, Louisiana and South Carolina – – – were deemed not to be in compliance with the Moody resolution and Speaker Sam Rayburn, presiding over the convention interrupted the roll call for the presidential nomination to decide whether or not those delegations could vote. Virginia’s delegation was seated after a tense roll call and considerable confusion, but Tennessee had voted against seating its sister Southern state. It would become an issue in Governor Gordon Browning’s reelection campaign that summer.

Speaker Sam Rayburn, an austere figure with his completely bald head and grim features, pounded the tarnation out of the rostrum with his gavel during the demonstration celebrating Kefauver’s name being placed in nomination. The glowering Speaker was clearly not pleased and Senator Kefauver, smoking one cigarette after the other, glared at the television screen and growled, “You’re just as rough as you can be.”

It was the next day that Harry Truman’s presence could be felt.

Averill Harriman had told Kefauver that he would rather support the Tennessean instead of Adlai Stevenson. Yet, with some prodding by the White House, Harriman found himself in the apartment of Stevenson’s sister, assuring the Illinois governor he would support Stevenson if he could not be nominated himself. Others fell away from Kefauver; Minnesota Senator Hubert Humphrey pledged his support to Stevenson when the time was right, yet bolted when pushed by Truman.

As the roll was called for the second ballot, President Harry S. Truman jauntily disembarked from his plane and was taken by limousine to his hotel. Truman was attending the Democratic National Convention less to receive the accolades usually reserved for an incumbent president than to help nominate a candidate other than Estes Kefauver.

According to Kefauver’s biographer, Charles Fontenay, Kefauver turned down Governor Allan Shivers a second time when Gordon Browning brought a mild statement saying the Tennessee senator had an “open mind” on the tidelines issue. Kefauver told Browning he could not sign it, as he didn’t have an open mind on the subject.

Once again, Kefauver led on the second ballot, although only narrowly ahead of Adlai Stevenson. Senator Kefauver seemed to believe he would win the nomination.

One can only imagine his shock when he was informed by Senator Blair Moody and Michigan Governor G. Mennen Williams that Averill Harriman was withdrawing and throwing his support to Stevenson. Harriman had the support of the large New York delegation and the two urged Kefauver to withdraw himself and support Stevenson. They told the stunned Kefauver he would surely get the credit for keeping the Democratic Party together.

Senator Kefauver, along with his friend and supporter, Senator Paul Douglas of Illinois, was headed to the convention hall to announce his withdrawal as a candidate when the third ballot had begun. The two hurried toward the rostrum where the roll was being called and Speaker Rayburn refused to interrupt the roll call. Douglas and Kefauver sat quietly on the platform and remained there for the next three hours. When Tennessee was called, Governor Gordon Browning used the occasion to beg Speaker Rayburn to let Senator Kefauver make a statement, but the old Texan stonily refused.

When the roll call ended, Adlai Stevenson was within two and one half votes of being the Democratic nominee. Estes Kefauver was finally allowed to speak to the convention. Certainly he had hoped to address the convention as its nominee, but he made a short and graceful speech and urged party unity. Adlai Stevenson emerged as the Democratic nominee and chose Alabama’s John Sparkman as his running mate.

A very disappointed Estes Kefauver returned home to Tennessee and to his dismay, discovered his friend Gordon Browning was in serious trouble in his reelection campaign. Facing the young, handsome and dynamic Frank Clement, Gordon Browning seemed almost like a relic. Even more of a relic was Tennessee’s senior senator and Kefauver’s nemesis, Kenneth D. McKellar, who was bidding for a seventh six-year term. McKellar faced Congressman Albert Gore in the primary and both the veteran senator and Governor Browning lost to their challengers. Clement was only thirty-two years old and Gore was forty-four.

Kefauver welcomed the change in his Senate colleague, but was distraught by Browning’s loss. It was the end of an era in Tennessee politics. Both McKellar and Browning had been fixtures in Volunteer State politics for generations. McKellar had represented Tennessee in Congress since 1911. Browning had first entered Congress in 1923 and had been governor three times. McKellar was eighty-three and becoming increasingly infirm, a sharp contrast with the vigorous Gore.

Gore had run a clever campaign, realizing the affection and respect most Tennesseans had for the aging McKellar, he had not been especially critical of the incumbent. On the other hand, Clement had lambasted Browning and had been so critical of a few transactions by the state that Browning was left huffing that his integrity had been questioned.

A new era had begun and Tennessee had an abundance of talent in Estes Kefauver, Albert Gore and Frank Clement. At forty-nine, Kefauver was the oldest of the trio. For the next decade, Kefauver, Gore and Clement would be the leading Democrats in Tennessee and more than a few times their ambitions would collide. Both Gore and Kefauver occasionally looked over their shoulders, as both worried that Clement might have senatorial ambitions.

One thing was certain; all three dreamed of the White House at night.