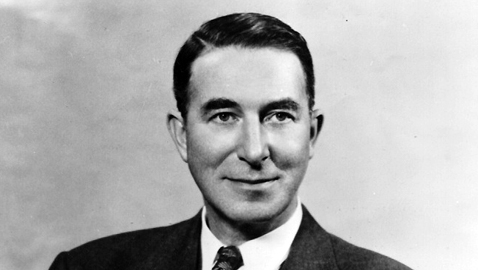 My grandmother was from Madisonville, Tennessee and I recall very well her traveling from her home in Maryville to attend the funeral of Senator Estes Kefauver in August of 1963. She retained a fondness for Senator Kefauver throughout her life and never missed an opportunity to vote for him. My grandmother’s affection for Senator Kefauver was most decidedly not shared by her husband, my grandfather, who was a devout Republican.

For over a decade, many Tennesseans did share my grandmother’s admiration and fondness for the man who may well have been the best personal campaigner the State of Tennessee has ever seen.

Carey Estes Kefauver was born on July 26, 1903 in Madisonville, the son of Robert Cooke and Phredonia Kefauver. Cooke Kefauver was not wealthy, although the family lived in an impressive home. The elder Kefauver was also well liked enough by his friends and neighbors to be elected Mayor of Madisonville five times.

Those who knew Estes Kefauver realized an event in his youth traumatized him severely. While swimming with his elder brother, Robert, Estes was headed towards the bank of the Tellico River when friends shouted that his brother had disappeared beneath the water. Estes quickly swam back and retrieved his brother and he and his friends tried to administer artificial respiration. They even rolled Robert over a barrel in an attempt to get the water from his stomach and lungs. Robert remained unconscious when they got him home although he later revived.

According to the recollection of a family friend, Robert was well enough later that evening to have a second helping of peach ice cream with his supper, but he went into convulsions and died on August 9, 1914.

It was a loss from which Estes Kefauver never recovered. Some of his friends believed Estes felt a sense of guilt for not having been able to more quickly save his brother and he pushed himself all the harder to achieve success after the loss of his older sibling. Kefauver’s ambition burned bright beneath his calm and deliberate exterior.

Kefauver had increasingly become more interested in politics and government through having been the attorney for the Chattanooga News. Kefauver launched a campaign for the Tennessee State Senate in 1938. It was a critical year for the Democratic Party in Tennessee, which was torn asunder by the two prevailing factions, one of which was headed by Governor Gordon Browning, while the other was headed by Senator K. D. McKellar and E. H. Crump.

Kefauver had well prepared himself for his State Senate campaign and even had the support of Senator Fletcher Morgan, who was retiring. Unfortunately for Kefauver, the strongest political organization in Hamilton County was that of County Judge Will Cummings. Judge Cummings supported a young attorney named Joe Bean, who had been defeated by Fletcher Morgan two years previously.

The tall and awkward Kefauver delivered leaden speeches on the campaign trail, which was a poor contrast to Joe Bean, who spoke smoothly and humorously. A successful attorney, as well as a former member of the Tennessee House of Representatives, Joe Bean knew far more about local politics than Estes Kefauver.

“I have always had liberal tendencies,” Kefauver confessed in a radio speech during his State Senate campaign. That philosophy would be at the center of every statewide campaign Estes Kefauver ever ran in Tennessee.

While campaigning, Kefauver picked up a devoted assistant who would be deeply involved in his political future for decades to come. While attending an ice cream social, Kefauver was approached by a pudgy blue-eyed twelve-year old boy who was the son of one of his supporters. Harry Mansfield was bright and friendly and the little fellow and Estes Kefauver hit it off and the candidate asked Harry’s mother if she would allow her son to accompany him on the campaign trail. She readily agreed and Harry Mansfield went everywhere with Kefauver. When the little boy became tired, he was hoisted atop the tall and lanky candidate’s shoulders.

Kefauver hit back hard against Bean and the Cummings organization. Kefauver was aghast at being referred to by Joe Bean as a wealthy corporation lawyer (never an asset in any election), and lashed back by referring his opponent as “Mr. Jelly Bean”, an amusing phrase conceived of by George Fort Milton, publisher of the Chattanooga News.

Kefauver tried for a little humor, saying, “The only objection I have to my opponent calling me a wealthy person is that it gets my creditors excited.”

Kefauver went on to opine, “If we should have a little earthquake, it would shake my small house down to the third mortgage.” The house in which Estes Kefauver lived was actually rented, but it was a great line for a campaign speech.

On Election Night, Kefauver started out in the lead, but the organization of Judge Will Cummings was very strong in Hamilton County and as the returns trickled in, Kefauver’s lead disappeared. Joe Bean won by 307 votes with more than 15,000 ballots having been cast. Little Harry Mansfield was so crushed he cried copiously. Many Kefauver supporters grumbled about election fraud, but Kefauver himself accepted the verdict of the people. It was the only election contest Estes Kefauver lost in Tennessee

Kefauver had been opposed to the county unit bill, which had been proposed by Governor Gordon Browning to destroy the Shelby County political organization headed by Edward Hull Crump of Memphis. Kefauver actually testified against the bill before the legislature.

Cooper and Kefauver became friends and even double dated occasionally, according to Kefauver’s biographer, Charles Fontenay. One of Cooper’s lady friends was admiring Kefauver a little too openly while they played golf and the tart-tongued Cooper made mention of it, causing his girl friend to sigh, “But, Prentice, he has such nice-looking shoulders!”

Needless to say, she did not become Mrs. Prentice Cooper.

After being elected governor in 1938, Cooper called for his friend Kefauver to serve as Commissioner of Finance and Taxation in his first administration. Kefauver politely refused the first offer and his former rival, State Senator Joe Bean promptly recommended another Chattanooga lawyer for the post. The peppery little governor evidently adamantly refused to consider anybody but Estes Kefauver.

Well after he had left the governor’s office, Prentice Cooper told journalist and Kefauver biographer Charles Fontenay that he insisted upon Estes Kefauver to serve as Commissioner of Finance for the simplest of reasons: “He was an honest man.”

Cooper explained, “You know, people will say ‘It shouldn’t be hard to find an honest man’. But a politically honest man is not only honest himself – – – he sees to it that everyone who works for him is honest.”

Kefauver had asked his senior law partner whether or not he should accept Governor Cooper’s offer and John Chambliss immediately said he should reject the offer. Chambliss pointed out Kefauver was making around $25,000 a year as an attorney, a considerable income at the time. The salary for the Commissioner for Finance was some $4,000 annually. Kefauver was a notoriously soft touch and was frequently sought out by former clients and friends who desperately needed money and the generous Kefauver would dole out small amounts here and there. It was eventually a continuous drain upon Estes Kefauver’s financial resources.

Finally Estes Kefauver relented and accepted Governor Prentice Cooper’s invitation to join his administration, although Kefauver cautioned the chief executive it was only a “temporary” acceptance.

Despite being wealthy, Prentice Cooper had a parsimonious soul and it was not unusual for the diminutive governor to ride the bus from his Capitol Hill office back to the governor’s mansion. His penchant for penny-pinching certainly extended to government and Estes Kefauver found himself trimming the state’s budget.

Upon his arrival in Nashville, Kefauver walked past a horde of silent state employees with grim faces. Kefauver looked at his executive assistant and murmured, “Tell them to go back to work. I’m not going to fire everybody.”

Working very long hours, besieged by those seeking state jobs, Kefauver often did not end his day until well after the sun went down. His wife, Nancy, would oftentimes come to his office so they could go out to supper together. Kefauver would then return to his office to dictate his mail.

Kefauver finally left his post in April of 1939 and rejoined his former law firm. Kefauver had barely settled back into the routine of practicing law before the Congressman from Tennessee’s Third District died unexpectedly July 11, 1939. There would be a brutal fight inside the Democratic Party to succeed an incumbent who had been in office since 1923.

To the dismay of friends and against the advice of his father, Estes Kefauver announced he was running for Congress.