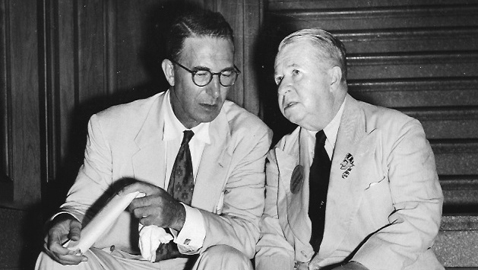 Estes Kefauver had quite nearly managed the impossible by getting himself elected to the United States Senate in 1948.  Kefauver took advantage of E. H. Crump’s mistake in refusing to back Senator Tom Stewart for reelection.

The state of the national Democratic Party that year was divided beyond all hope.  President Harry Truman had been opposed by many Democrats for renomination and virtually nobody believed he could win the general election.  Florida U. S. Senator Claude Pepper urged fellow Democrats to reject Truman and draft General Dwight D. Eisenhower as the nominee.  Truman did receive the Democratic presidential nomination, but unhappy Southern Democrats bolted the convention.  Southern Democrats, bitter about the civil rights plank adopted at the convention, rallied around South Carolina Governor Strom Thurmond.  The far left of the Democratic Party was already supporting the presidential candidacy of yet another candidate, former Vice President Henry A. Wallace who was the nominee of the Progressive Party.  Harry Truman would have to face not only the Republican candidate, New York Governor Thomas E. Dewey, but also Strom Thurmond and Henry Wallace in the general election.

In Tennessee, Henry Wallace would not be a factor, but E. H. Crump, leader of the Shelby County machine, was preparing to compound his previous political mistakes.  Once having been notorious for not only allowing black folks to vote inside Democratic primaries, but actually encouraging them to do so, Crump was preparing to support the ‘Dixiecrats’.  For years, the Shelby County organization had extended government services to the black community and the machine paid the poll taxes for those African-Americans who wished to vote.  Of course they were expected to vote the Crump ticket and they did.

Crump, a millionaire businessman, liked the way things were and felt threatened by the civil rights plank in the Democratic Party platform.  E. H. Crump was not interested in changing the fundamentals of the Sourhern way of life.  The Memphis Boss announced he would support Strom Thurmond and the Dixiecrats.

Tennessee Republicans believed the split in the Democratic Party might well pay dividends for them and they nominated serious candidates for both governor and the United States Senate.  Legendary country music star Roy Acuff was the GOP nominee for governor and B. Carroll Reece was the nominee for the Senate.

Reece had been the Congressman from Tennessee’s highly Republican First District off and on since 1922.  In 1946, Reece retired from Congress as he had been elected as Chairman of the Republican National Committee.  Reece presided over the election that returned Republicans to power, albeit briefly.  The GOP took control of both houses of Congress in 1946 with a slogan that resonated with voters weary of sacrifice and deprivations relating to the recent world war, “Had Enough?”

Reece was quite wealthy and began touring the state in a shiny new Cadillac, leaving his campaign advisers horrified.  They quickly changed vehicles to give Reece the appearance of a man of the people.

Tennessee Democrats were nervous, not only because the party was divided, but Roy Acuff was drawing enormous crowds.  The gubernatorial candidate and his Smoky Mountain boys would entertain the audiences with music while Carroll Reece usually made the speeches.  Reece, like Crump in the recent Democratic primary, charged that Congressman Kefauver was too sympathetic to Communism.  Kefauver hit back that Reece, who had served in Congress for twenty-six years, had never given the Tennessee Valley Authority the support it deserved; in fact, Kefauver told Tennesseans, Reece had been opposed to the TVA.

Some believed that Crump might be induced to support the Republican ticket, such was the Memphis Boss’s antipathy for Gordon Browning and Estes Kefauver.  Crump’s personal friend and political partner, Senator K. D. McKellar, had already endorsed the Democratic ticket, including President Truman, as well as Browning and Kefauver.  McKellar was a loyal Democrat and refused to budge regardless of what Crump himself did.  McKellar even made a personal financial contribution to the state campaign fund.  Senator McKellar also raised some $30,000 for the Democratic campaign.

E. H. Crump never gave the Republicans any help in the general election and 1948 proved to be a terrible year for Republicans.  Harry Truman beat Thomas E. Dewey and the Republicans lost control of the Congress.  The Republican ticket fared no better in Tennessee.  Estes Kefauver defeated Carroll Reece for the United States Senate by almost two hundred thousand votes.  Gordon Browning returned to the governor’s mansion after beating Roy Acuff by a margin of two to one.

The biggest loser in the 1948 was E. H. Crump who had lost not only both the gubernatorial and senatorial elections, but had alienated himself from the national Democratic Party by backing the Dixiecrats.  Crump’s only tie to the national party was his old friend McKellar.  Of course Crump still ruled in Memphis and Shelby County.  Hopeful opponents, thinking Crump’s power and influence had seriously diminished, fielded a slate of candidates against the Crump ticket in the next election.  To their surprise, the Crump ticket won easily.

Estes Kefauver had not yet taken the oath of office before running afoul of his powerful senior colleague, Senator Kenneth D. McKellar.  McKellar had been dining at the elegant Mayflower Hotel, where he lived while in Washington.  Evidently one of Kefauver’s supporters and friends approached the old senator and suggested that he and Kefauver would take care of some of the political patronage, if McKellar didn’t mind.  McKellar did mind and the famous McKellar temper erupted.  The gentlemen left in quick retreat and Senator McKellar sent a blistering seven-page letter to Kefauver accusing the Congressman of dishonesty.  McKellar pointed out Kefauver had assured him that the Congressman wanted to “cooperate” with him.  Senator McKellar sarcastically noted that Kefauver’s idea of cooperation was to do all the operating and leave the “co” to McKellar.

McKellar also likely embarrassed Kefauver by noting that the Congressman had campaigned in the general election without supporting the candidacy of Harry Truman and had anticipated Truman’s defeat by having recommended a Republican for an important federal appointment.

Kefauver, apparently sensing trouble with the irascible McKellar, had sent word that he wished to come by McKellar’s office and the old senator closed his letter saying he was still welcome to come.  McKellar, once retired from the Senate, related the spat with Kefauver and claimed to have chased the surprised Kefauver out of his office while brandishing his cane.  It was certainly in character for the old senator.

Evidently Kefauver somehow managed to placate McKellar, if only briefly, as McKellar observed Senate decorum and escorted his new colleague down the aisle to be sworn into office.  Kefauver was the eighth senator from Tennessee to serve with K. D. McKellar.

The personal relations between the two men did not remain cordial for long.  The two constantly bickered over patronage and McKellar was infuriated by one of the few instances when Kefauver got his way.  McKellar was backing the reappointment of Reed Sharp as U. S. Marshal for Middle Tennessee, while Kefauver supported another individual.  Kefauver claimed Sharp had supported Strom Thurmond and the Dixiecrats, which was apparently enough for Harry Truman to refuse to reappoint him.

Kefauver also managed to thwart McKellar’s desire to give former senator Tom Stewart a plum in the form of an appointment as attorney for the Reconstruction Finance Corporation in Nashville.  Senator Kefauver wasn’t keen on giving any kind of position to his former opponent and the appointment never came through.

McKellar demonstrated his power inside the Senate when the two disagreed over judgeships in Tennessee.  McKellar had introduced a bill to provide Tennessee with a fourth federal judge.  Kefauver wanted the new judge to be a “roving” judge and hear cases in different parts of the state, a notion which displeased McKellar.  Despite being a member of the Senate’s Judiciary Committee, Kefauver found himself routed by McKellar, who took the dispute to the floor of the United States Senate.

Although aging and increasingly more often ill, Senator McKellar had lost none of his shrewdness in managing a bill inside the Senate and his disdain for his younger colleague was plain for all to see.

According to Kefauver’s biographer, Charles Fontenay, Kefauver’s Administrative Assistant, Charles Neese, believed the dislike of Senator McKellar helped to isolate Estes Kefauver in the Senate.  Kefauver would never be personally popular with his colleagues; quite to the contrary in fact.  Kefauver’s reputation as a loner and a maverick was, according to Neese, largely due to the dislike of the powerful McKellar during the four years to two served together.

The Southerners were especially powerful inside the United States Senate and most of the powerful committee chairmanships were held by Southerners.  Southern senators tended to be reelected by their respective states and in a body where seniority brought increased power and influence, the Southerners occupied positions of real power.  By and large, Estes Kefauver was detested by his fellow Southern senators.

Having the luxury of running once every six-years rather than every two-years as he had to do while in the House of Representatives, Kefauver invested in a home for his family.  New Mexico senator Carl A. Hatch (author of the famous Hatch Act) was returning home after having retired to accept a federal judgeship and Kefauver bought the Hatch house.  It was a comfortable home, one which the Kefauver children enjoyed tremendously.  The Kefauver household was an informal one and the Kefauver children’s friends came and went as they pleased, which apparently never bothered either senator or Mrs. Kefauver.  The house was chock full of happy children and pets.

The Kefauvers enjoyed a pleasant life in the nation’s Capitol and Estes bought himself a new Packard sedan, although he rarely ever drove himself, save for when he led family excursions.  The senator also bought his wife Nancy a sporty new Studebaker convertible.

Life in Washington was good for Estes Kefauver and his family.