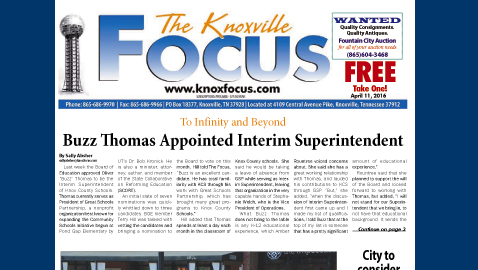 Last week the Board of Education approved Oliver “Buzz” Thomas to be the Interim Superintendent of Knox County Schools. Thomas currently serves as President of Great Schools Partnership, a nonprofit organization best known for expanding the Community Schools Initiative begun at Pond Gap Elementary by UT’s Dr. Bob Kronick. He is also a minister, attorney, author, and member of the State Collaborative on Reforming Education (SCORE).

An initial slate of seven nominations was quickly whittled down to three candidates. BOE member Terry Hill was tasked with vetting the candidates and bringing a nomination to the Board to vote on this month.  Hill told The Focus, “Buzz is an excellent candidate. He has total familiarity with KCS through his work with Great Schools Partnership, which has brought many great programs to Knox County Schools.”

Hill added that Thomas spends at least a day each month in the classroom of Knox County schools.  She said he would be taking a leave of absence from GSP while serving as Interim Superintendent, leaving that organization in the very capable hands of Stephanie Welch, who is the Vice President of Operations.

What Buzz Thomas does not bring to the table is any K-12 educational experience, which Amber Rountree voiced concerns about. She said she has a great working relationship with Thomas, and lauded his contributions to KCS through GSP. “But,” she added, “when the discussion of Interim Superintendent first came up and I made my list of qualifications, I told Buzz that at the top of my list is someone that has a pretty significant amount of educational experience.”

Rountree said that she planned to support the will of the Board and looked forward to working with Thomas, but added, “I will not stand for our Superintendent that we bring in, to not have that educational background. It sends the wrong message to all of our stakeholders.”

KCEA president Lauren Hopson shares Rountree’s positive working relationship with Thomas, but also echoed her concerns about finding someone to fill the permanent position that has extensive classroom experience.  “That’s vital to understanding how the policies that are created impact the classroom,” she said.

Thomas, who was out of town during last week’s  Board meetings, issued the following statement:

“I am honored to be chosen by the Board of Education for this incredibly important position.  I know how dedicated each board member is to the well-being of our children and the success of our schools.  Family circumstances beyond my control have forced me to be away this week, but I look forward to returning to assist the board in its critical mission.”

Chairman Doug Harris will work with the Law Department to draft a contract for the Interim Superintendent, which Board members are expected to vote on in May.  The search for the permanent Superintendent will begin after the new Board is seated in September.