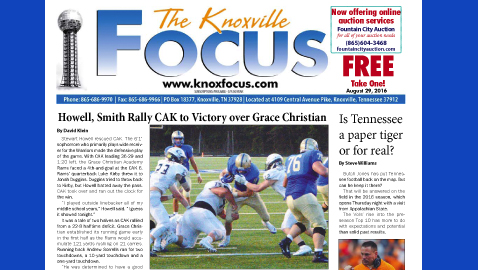 Stewart Howell rescued CAK. The 6’1” sophomore who primarily plays wide receiver for the Warriors made the defensive play of the game. With CAK leading 36-29 and 1:20 left, the Grace Christian Academy Rams faced a 4th-and-goal at the CAK 6. Rams’ quarterback Luke Kirby threw it to Jonah Duggins. Duggins tried to throw back to Kirby, but Howell batted away the pass. CAK took over and ran out the clock for the win.

“I played outside linebacker all of my middle school years,” Howell said. “I guess it showed tonight.”

It was a tale of two halves as CAK rallied from a 22-8 halftime deficit. Grace Christian established its running game early in the first half as the Rams would accumulate 121 yards rushing on 21 carries. Running back Andrew Sorrells ran for two touchdowns, a 10-yard touchdown and a one-yard touchdown.

“He was determined to have a good game,” Rams Head Coach Randy McKamey said of Sorrells.  “He’s just a junior. He’s our work horse.”

Grace started the scoring on a 79-yard touchdown pass on a broken play. Kirby fumbled the snap, avoided CAK’s pass rush and threw the football to Ben Andrews, who had gotten behind the Warrior defense. Andrews ran untouched for the early Grace lead.

CAK answered with Alex Dalton’s 2-yard run with 10:32 left in the second quarter. The Warriors’ West Shuler ran for a 2-point conversion and an 8-7 lead.

Despite the penalties and the first half offensive inefficiencies, CAK’s senior quarterback Cole Smith rallied the Warriors in the second half. Facing a 2nd and 25, Smith eluded the Rams’ pass rush to scamper 44 yards for a touchdown. CAK cut the Rams’ lead to 22-15 with 9:39 left in the third quarter.

“It was a broken down play. I was just trying to make a play with my feet. I was telling the guys, we got to stay even keel all night,” Smith said of his team bouncing back from the early deficit.

After Smith’s touchdown run, the Warriors’ defense made an interception to get the ball back. Hayden Tanner stepped in front of a Kirby pass to thwart a Rams’ drive.

From there, the Warriors passing game showed signs of life as Smith completed three passes in a row for first downs. Facing a third and 1, Smith found Howell in the corner of the end zone for a 13-yard touchdown pass. Kicker Isaac Gallegos made the extra point, and the Warriors tied the game at 22 to end the third quarter.

Grace rallied back at the beginning of the fourth. Sorrells ran for 19 yards and Kirby completed a 31-yard pass to Eli Nordhorn. The Rams finished the drive on Kirby’s 17-yard touchdown pass to Sorrells, his third touchdown of the game, as Grace regained the lead 29-22.

Getting the ball back, Smith again worked his magic. He ran for a 36-yard touchdown straight up the middle to tie the game at 29.

Smith was the leading rusher of the ballgame with 101 yards, part of his 389 yards of total offense, out of 447 total yards by CAK.

Grace Christian’s drive stalled, and CAK got the ball back.  This time Smith found Luke Simpson for a 55-yard touchdown pass as CAK regained the lead for good 36-29 and set the stage for Howell’s late game defensive heroics.