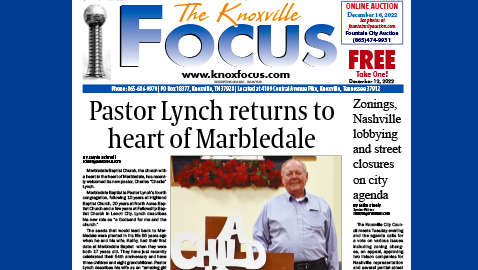 Marbledale Baptist Church, the church with a heart in the heart of Marbledale, has recently welcomed its new pastor, Charles “Charlie” Lynch.

Marbledale Baptist is Pastor Lynch’s fourth congregation, following 10 years at Highland Baptist Church, 20 years at North Acres Baptist Church and a few years at Fellowship Baptist Church in Lenoir City. Lynch describes his new role as “a Godsend for me and the church.”

The seeds that would lead back to Marbledale were planted in his life 55 years ago when he and his wife, Kathy, had their first date at Marbledale Baptist when they were both 17 years old. They have just recently celebrated their 54th anniversary and have three children and eight grandchildren. Pastor Lynch describes his wife as an “amazing girl who pays attention to those in need..” She is not only the wind beneath his wings but the “mother of the church and a real pastor’s wife.”

The call to serve at Marbledale Baptist came as Pastor Lynch was dealing with some health issues following a near six-month recovery from his battle with throat cancer. He had no voice during the recovery and had to whistle to get his wife’s attention. Pastor Lynch said his voice was still raspy when Marbledale Baptist asked him to fill in while they searched for a new pastor.

“I just feel blessed that God can still use me. You don’t realize how much you use your voice until you don’t have it anymore.”

He recently used that voice for the first time in three years, singing “The King is Coming” a capella during service. He told The Focus, “I never had the voice to do that before.”

When asked about this miraculous moment in the church, members of his congregation reflected on the surprising “boom of vocals” that filled the church, bringing many to tears.

Rehearsing for their upcoming holiday presentation, Walk Through the Life of Christ, members also shared the entire community’s welcoming of Pastor Lynch and his wife. Collectively Lyna Duggan and Donnie and Tonia Fawver shared, “It is about God and the people and building and restoration. Charlie feels like home. He has mended hearts and brought us together. I can’t imagine this space without him and his wife.”

Pastor Lynch’s personal goals for the church are to help it heal from the turmoil of changes in the past years and to help it grow in new ways, such as its youth program.

“This has answered a lot of prayers. God has opened doors; he’s opened so much. This church has just been an outstanding place for us.”

Pastor Lynch equates the stories of restoration and healing—for his voice, his family, the church (the original church building was destroyed in a fire in 2002)—to the story of Job. Job lost his family and his riches with the latter part of Job’s life being greater than the first.

“I look forward to the latter part of my ministry being better than even the first part was. I’ve had great experiences everywhere I’ve ministered and God speaks through open doors. Being at Marbledale is an open door, and we are excited with anticipation of what’s about to take place.”

Pastor Lynch shared with The Focus the story of a man whose life recently came full circle. The young man was in need during a very rough time in his life and Lynch helped fill that need. Recently this young man, now an adult, won some money and donated it to the church. He told Pastor Lynch, “You made sure I had a Christmas many years ago.”

“I tell this congregation I love them. I’m not satisfied with a position or a title, I want to go beyond that. I want to continue to love like Christ.”