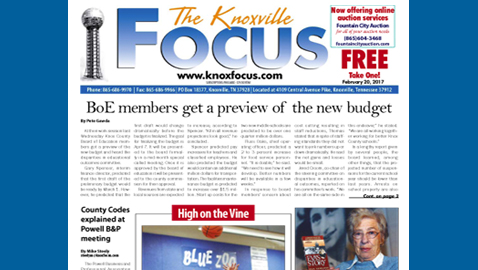 BoE members get a preview of the new budget

At their work session last Wednesday Knox County Board of Education members got a preview of the new budget and heard the disparities in educational outcomes committee.

Gary Spencer, interim finance director, predicted that the first draft of the preliminary budget would be ready by March 1. However, he predicted that the first draft would change dramatically before the budget is finalized. The goal for finalizing the budget is April 7. It will be presented to the board formally in a mid-month special called meeting. Once it is approved by the board of education it will be presented to the county commission for their approval.

Revenues from state and local sources are expected to increase, according to Spencer. “All in all revenue projections look good,” he concluded.

Spencer predicted pay increases for teachers and classified employees. He also predicted the budget would contain an additional million dollars for transportation. The facilities maintenance budget is predicted to increase over $1.5 million. Start up costs for the two new middle schools are predicted to be over one quarter million dollars.

Russ Oaks, chief operating officer, predicted a 2 to 3 percent increase for food service personnel. “It is doable,” he said. “We need to see how it will develop. Better numbers will be available in a few weeks.”

In response to board members’ concern about cost cutting resulting in staff reductions, Thomas stated that in spite of staffing standards they did not want to jerk numbers up or down dramatically. He said the net gains and losses would be small.

Jered Croom, co-chair of the steering committee on disparities in educational outcomes, reported on his committee’s work. “We are all on the same side in this endeavor,” he stated. “We are all working together working for better Knox County schools.”

In a lengthy report given by several people, the board learned, among other things, that the projected number of suspensions for the current school year should be lower than last years. Arrests on school property are also down. This year a new program has been instituted. If a family member of a student is involved with the Knoxville Police Department, an email is sent to school officials so they can provide extra support for that student.

Thomas commented that restoratives practices are being used which tend to build positive relationships rather than promoting punishment.

Carl Wheeler, an interested citizen, addressed the board on the issue. He stated that it is very important for the memorandum of understanding (MOU) between Knoxville schools and the Knox County Sheriff’s Office and the Knoxville Police Department to be reviewed every year. He stated that the current MOU has not been reviewed since 2009. It is his opinion that an up to date MOU would have a definite effect on reducing disparities in educational outcomes. He also urged that the juvenile justice system be reviewed.

The superintendent search committee meets again on February 21. Amber Rountree stated that at that meeting criteria will be developed that will be used to select the final applicants. The committee will also be discussing answers that candidates gave to the interview questions and the psychological testing. The committee will meet again on February 28 to narrow the list down to two members to be presented to the board.

Gary Dupler, deputy law director for Knox County, stated that any suggestions school board members have for the superintendent selection committee be forwarded either to Terri Coatney, executive assistant to the board, or Thomas. Then all suggestions could be forwarded to the committee.

In response to a question Dupler replied that interested board members will be able to view video answers to interview questions and psychological testing on an individual bases the same as committee members.