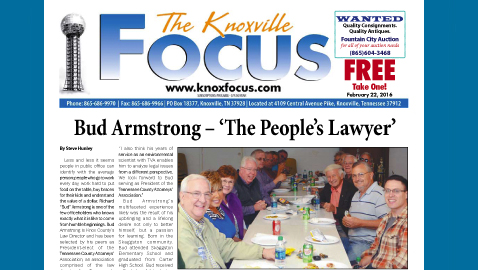 Less and less it seems people in public office can identify with the average person; people who go to work every day, work hard to put food on the table, buy braces for their kids and understand the value of a dollar. Richard “Bud” Armstrong is one of the few officeholders who knows exactly what it is like to come from humble beginnings. Bud Armstrong is Knox County’s Law Director and has been selected by his peers as President-elect of the Tennessee County Attorneys’ Association, an association comprised of the law directors from Tennessee’s ninety-five counties. Some of the law directors across the state are elected and some are appointed, but Bud Armstrong, currently serving as a board member, was selected to serve all of them as their association president beginning in May.

“I have been impressed with Bud’s down-to-earth persona and his ability to relate to people,” said Jon Cooper, Director of Law for Metro Davidson County, “I also think his years of service as an environmental scientist with TVA enables him to analyze legal issues from a different perspective. We look forward to Bud serving as President of the Tennessee County Attorneys’ Association.”

Bud Armstrong’s multifaceted experience likely was the result of his upbringing and a lifelong desire not only to better himself, but a passion for learning. Born in the Skaggston community, Bud attended Skaggston Elementary School and graduated from Carter High School. Bud received a Bachelor of Arts degree in Quantitative Economic Geography and a Master of Sciences degree in Curriculum and Instruction from the University of Tennessee. Most folks would have been satisfied to stop there, but Bud Armstrong was accepted to the prestigious Columbia University in New York City where he earned a doctoral degree in education. Several years later Bud received a doctor of jurisprudence degree from the Nashville School of Law and passed the Tennessee Bar. A love of the law was to become Bud’s second career.

Bud, the child of a single mother, worked to put himself through college in a variety of jobs, including education, real estate, tax, and finance. Bud worked both in the private and public sectors, accepting a job offer from TVA. During his twenty-nine year career with the Tennessee Valley Authority, Bud was recognized as an expert on the National Environmental Protection Act. Bud managed teams of lawyers in a variety of fields, from environmental law to human resources for an agency that has been a mainstay of Knoxville’s economic life since 1933. Bud served as an advisor to the Congress of the United States as well as various state and local governments across the Southeast. Bud also consulted with colleges and universities not only across the United States, but internationally as well.

Very modest, it is almost impossible for anyone to pry details about his life story from Bud Armstrong. Armstrong will concede he did not have a lot of advantages growing up, but he believed in working hard, setting goals and meeting those goals. Armstrong’s recognition by his peers is something Knox Countians should be proud of. Tom McFarland, Roane County attorney stressed the distinction of Armstrong having been chosen to lead the Tennessee County Attorneys’ Association.

“It is quite an honor for any county attorney to lead our statewide organization,” McFarland said. “Bud came on board with our Board of Directors and has done an outstanding job.”

Managing lawyers is nothing new for Armstrong. For more than thirty-five years Bud Armstrong has managed attorneys in one capacity or another.  During his first term as Knox County Law Director, Bud carefully put together a group of attorneys noted for professionalism as well as providing excellent representation for Knox County. The Law Director has a wide range of responsibilities, representing county officeholders, legislative bodies and entities. Yet when asked about his clients, Bud Armstrong invariably answers, “Ultimately, we represent the taxpayers of Knox County. Every dollar saved in any way, is a dollar saved for the taxpayers.”

Mills, who served with five different law directors during his time on county commission, said, “Bud Armstong is by far the best.”

“Bud has been quite fair and impartial,” Mills continued. “It’s a very difficult job, but he’s done it well.”

Yet Bud Armstrong’s experience and careful management have paid dividends for the clients he values most—taxpayers. Under Armstrong’s stewardship, Knox County’s legal settlements and payouts are down across the board; the Law Department has saved approximately $2.5 million by winning nuisance cases instead of simply settling the cases out of court. Bud Armstrong’s refusal to settle cases has upset some local lawyers, as they rely on such cases for a living.

Armstrong’s office also began collecting the delinquent taxes for Knox County. In the past, the Delinquent Tax Attorney’s post was performed outside of the Law Director’s office and was one of the prime political patronage plums in Knox County government for decades. The outside Delinquent Tax Attorney earned huge fees and qualified for a county pension, all for little more effort than signing his name. In addition, Armstrong’s decision to collect back taxes in his department has saved $200,000 a year for taxpayers. Using the same approach, Armstrong created an in-house Worker’s Compensation Department, which saves Knox County taxpayers more than $100,000 annually. Perhaps most irritating of all, especially to some local lawyers, was Armstrong’s decision to stop farming out legal work and do the work in-house, saving taxpayers more than $1 million. Armstrong’s opponent is a member of a law firm once headed by a delinquent tax attorney; that same firm was frequently hired in the past  by previous Law Directors for legal work. Bud Armstrong readily acknowledges his decisions were not uniformly popular, especially with attorneys pitched off the gravy train. “That didn’t make my opponent happy,” Armstrong said, “but it was the right thing to do for the people of Knox County and the taxpayers.”

Armstrong has insisted the Knox County schools and the superintendent be accountable, a notion which has infuriated some Board of Education members. Bud Armstrong, when asked, merely shrugged and replied, “Everybody has to follow the law. you, me, board of education members, and the superintendent, too. it applies to everybody and nobody is above it.”

Armstrong admits the budget for his office has increased slightly, but the net savings to the taxpayers and streamlining multiple processes has been efficient and more than cost effective.

“You know, some folks say I am ‘The People’s Lawyer’,” Armstrong remarked, “and to me there’s just not a greater compliment. I am content to be just that, the people’s lawyer.”