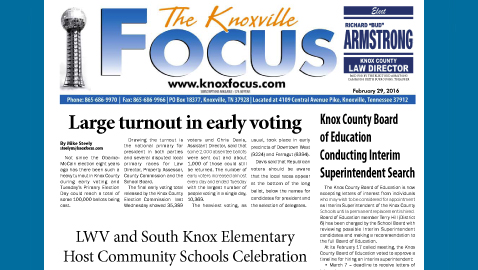 Not since the Obama-McCain election eight years ago has there been such a heavy turnout in Knox County during early voting and Tuesday’s Primary Election Day could reach a total of some 100,000 ballots being cast.

Drawing the turnout is the national primary for president in both parties and several disputed local primary races for Law Director, Property Assessor, County Commission and the School Board.

The final early voting total released by the Knox County Election Commission  last Wednesday showed 35,389 voters and Chris Davis, Assistant Director, said that some 2,000 absentee ballots were sent out and about 1,000 of those could still be returned. The number of early voters increased almost every day and ended Tuesday with the largest number of people voting in a single day, 10,369.

The heaviest voting, as usual, took place in early precincts of Downtown West (9224) and Farragut (6394).

Davis said that Republican voters should be aware that the local races appear at the bottom of the long ballot, below the names for candidates for president and the selection of delegates.