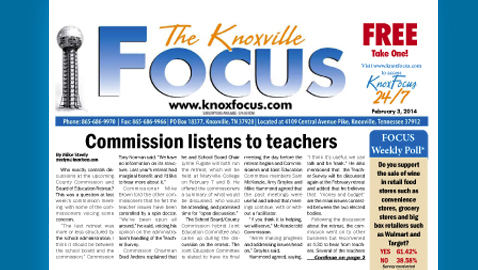 Who exactly controls discussions at the upcoming County Commission and Board of Education Retreat? This was a question at last week’s commission meeting, with some of the commissioners voicing some concern.

“The last retreat was more or less structured by the school administration; I think it should be between the school board and the commission,” Commission Tony Norman said. “We have no information on its structure. Last year’s retreat had marginal benefit and I’d like to hear more about it.”

Commissioner Mike Brown told the other commissioners that he felt the teacher issues have been controlled by a spin doctor. “We’ve been spun all around,” he said, voicing his opinion on the administration’s handling of the Teacher Survey.

Commission Chairman Brad Anders explained that he and School Board Chair Lynne Fugate will both run the retreat, which will be held at Maryville College on February 7 and 8. He offered the commissioners a summary of what would be discussed, who would be attending, and promised time for “open discussion.”

“If you think it is helping, we will serve,” McKenzie told Commission.

Hammond agreed, saying, “I think it’s useful, we can talk and be frank.” He also mentioned that  the Teacher Survey will be discussed again at the February retreat and added that he believes that  “money and budget” are the main issues contested between the two elected bodies.

Following the discussion about the retreat, the commission went on to other business but reconvened at 4:30 to hear from teachers. Several of the teachers present at Commission had previously addressed the school board and reflected on what the school board has heard several times: teachers continue to be in disagreement with their central office, their principals, and the board of education.

Commissioner Norman’s insistence on keeping the item on the agenda as a “teacher revolt” spearheaded the discussion.

“Hang in there, this isn’t over, this is just the beginning,” Norman told the teachers.

McKenzie asked the law director if the commission could actually discuss school board items on their agenda and received a yes. Basically the commission was told they could discuss items and pass a school budget, but could not tell the school board how to spend the budget.

Mike Brown said flatly that he would not vote for an increase in a school board budget.

Several teachers described the situation as a moral crisis, a movement, discontent, a revolt, stress, and “just plain wrong.” One teacher wondered publically if much of his personal problems are because he tried so hard to achieve a high score. Another said that although his students have very high scores, he has received two letters saying he could be dismissed. Two teachers asked where the grant moneys that  Knox County schools had received were spent, one saying “certainly not in my classroom.”

At the conclusion of the public forum by teachers, the commissioners made statements.

Brown told the teachers to “Never give up, never give up.” He said he had four teachers in his neighborhood who have left teaching in Knox County because of the workload and stress.

Hammond said he understands and mentioned family members who are teachers. He said his daughter, a teacher of eight years, left teaching because of the new system although she doesn’t teach in Knox County. “I want to thank you for speaking your mind,” he said.

Commissioner R. Larry Smith said, “We’re going to take a lot of this to the retreat.”

McKenzie said they will be taking some “hard questions” to the retreat and called the situation “an encouraging dialog.” He also said that “no evaluation process is perfect.”

Commissioner Jeff Ownby told the teachers, “You are the experts. I’m going to look at the (school) budget closer.”

“I commend you for standing up, it was a great risk, please continue doing it,” Ownby added.

Brown asked the other commissioners if they had read the 163 comments made by the teachers following the survey and added that the recent announcements of a few changes constitutes “throwing you guys a bone,” directing the comment to the teachers in the audience.

“We hear you,” added Broyles. “This is a moment when our children are learning from us.” She also said she is opposed to excessive testing and was optimistic about the outcome.

Commissioner Richard Briggs said the hard work of the teachers is evident by the improved test scores of the students and pointed to national publications that pointed to Tennessee’s improvement.

Norman said that the emotions of the teachers were undeniable. “Who knows what will come of the retreat,” he said. “We’re just getting started.”