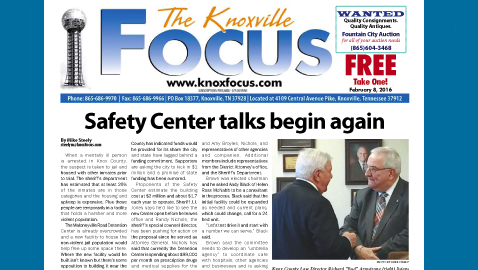 When a mentally ill person is arrested in Knox County, the suspect is taken to jail and housed with other inmates prior to trial. The sheriff’s department has estimated that at least 25% of the inmates are in those categories and the housing and upkeep is expensive. Plus those people are temporarily in a facility that holds a harsher and more violent population.

The Maloneyville Road Detention Center is already overcrowded and a new facility to house the non-violent jail population would help free up some space there. Where the new facility would be built isn’t known but there’s some opposition to building it near the Detention Center.

For several years the need for a special facility, a Safety Center, has been discussed and the matter was on the Knox County Commission’s February 16 work session agenda, in a second effort to ask for bids to build such a facility. The discussion will be postponed as the Safety Center Committee wants to get more agencies involved in the plans. The first round of bidding saw only one bidder, the Helen Ross McNabb Center. Although Knox County has indicated funds would be provided for its share the city and state have lagged behind a funding commitment.  Supporters are asking the city to kick in $1 million and a promise of state funding has been rumored.

Proponents of the Safety Center estimate the building cost at $2 million and about $1.7 each year to operate. Sheriff J.J. Jones says he’d like to see the new Center open before he leaves office and Randy Nichols, the sheriff’s special counsel director, has been pushing for action on the proposal since he served as Attorney General. Nichols has said that currently the Detention Center is spending about $89,000 per month on prescription drugs and medical supplies for the care of inmates and that would be reduced if the Safety Center was built.

The commission’s Safety Center Committee met Friday on the 6th floor of the City-County Building with Sheriff’s Department representatives to begin discussing the need and the details. The possibility of building the new facility behind the McNabb Center is also being considered. The committee consists of Commissioners Mike Brown, Jeff Ownby, Randy Smith and Amy Broyles, Nichols, and representatives of other agencies and companies. Additional members include representatives from the District Attorney’s office, and the Sheriff’s Department.

Brown was elected chairman and he asked Andy Black of Helen Ross McNabb to be a consultant in the process. Black said that the initial facility could be expanded as needed and current plans, which could change, call for a 24 bed unit.

“Let’s test drive it and start with a number we can serve,” Black said.

Brown said the committee needs to develop an “umbrella agency” to coordinate care with hospitals, other agencies and businesses and is asking that a representative of the city and county mayors’ offices become involved. Vivian Shipe, a proponent of a Safety Center, was also selected for the committee.

There’s some debate about how large the facility would be, how many beds, how long a patient would stay there and what treatment would be available after discharge.

There is some speculation that the state may kick in more money than previously anticipated which could possibly make the new Safety Center larger than currently discussed and possibly turn the new facility into a regional treatment center.

The small meeting room was packed with citizens and officials.  Brown said that he will secure the small conference room for the next meeting, which is planned for Friday, February 26th at 1 p.m.

Two committee members may  visit a similar facility in San Antonio Texas which has been in operation for 10 years.

“We’re just in the preliminary stage,” Nichols told the meeting.

Speaking of the plans, growth and preparation for a bid, Brown said, “We can adjust it as needed.”