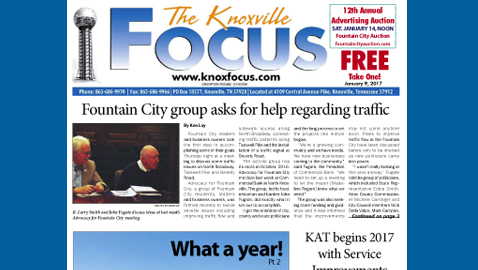 Fountain City leaders and business owners took the first step in accomplishing some of their goals Thursday night at a meeting to discuss some traffic issues on North Broadway, Tazewell Pike and Beverly Road.

Advocacy for Fountain City, a group of Fountain City residents, leaders and business owners, was formed recently to tackle several issues including improving traffic flow and sidewalk access along North Broadway, connecting traffic patterns along Tazewell Pike and the installation of a traffic signal at Beverly Road.

The activist group has its roots in October, 2016. Advocacy for Fountain City met late last week at Commercial Bank in North Knoxville. The group, led by businessman and banker John Fugate, did exactly what it set out to accomplish.

It got the attention of city, county and state politicians and the long process to set the projects into motion began.

“We’re a growing community and we have needs. We have new businesses coming to the community,” said Fugate, the President of Commercial Bank. “We need to set up a meeting to let the mayor [Madeline Rogero] know what we need.”

The group was also seeking state funding and guidance and it was informed that the improvements may not come anytime soon. Plans to improve traffic flow in the Fountain City have been discussed before only to be shelved as new politicians came into power.

With the city, county and state budgets nearly complete, the funds will likely not be available in 2017 but it was Wallace who broke things down on the simplest terms.

“You have to get the mayor’s attention,” he said.

“This was very positive,” Fugate said. “We’re going to get our meeting with the mayor in the coming weeks.”

Following its meeting with Rogero, Advocacy for Fountain City will convene again. That meeting will likely be on a Friday night according to Fugate.