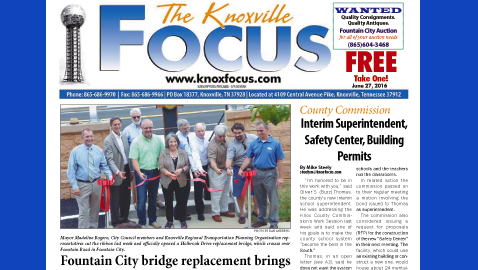 Added improvements include sidewalks, bike lanes, a stairway down to Fountain Road and an extended clearance over Fountain Road – from 10 feet 10 inches to 14 feet 6 inches.

“When we have to temporarily close a road or a bridge to rehabilitate existing infrastructure, it’s an ideal time to evaluate other enhancements that can be made to benefit the community,” said Jim Hagerman, the City’s Engineering Director.

Hagerman said the City recently developed the Bicycle Facilities Plan to use as a guide for routine upgrades to infrastructure facilities, such as bridges. It complements the Complete Streets ordinance passed by City Council in 2014.

Approximately $1.5 million of the total $1.9 million bridge project was funded through a federal Surface Transportation Program grant, with $300,000 assistance from a Tennessee Department of Transportation Bridge Aid grant. The remainder of the cost was covered through the City’s capital improvements fund. CDM Smith designed the replacement bridge, and Charles Blalock and Sons Inc. served as the project contractor.

This bridge is one of 97 bridges that the City maintains with bi-annual inspections conducted by the Tennessee Department of Transportation. The Bridge Maintenance Program has been a consistent item on the City’s capital budget for years, receiving $650,000 each year. Of the nearly 100 bridges in the City, only five currently have received a “poor” rating, and all of them either have a contract pending for replacement or are in the replacement design stage.