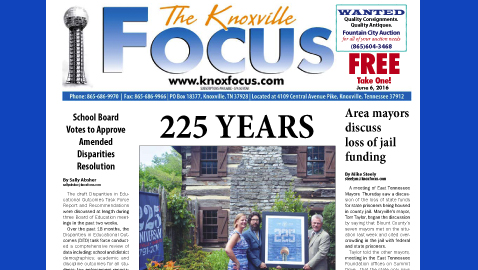 A meeting of East Tennessee Mayors  Thursday saw a discussion of the loss of state funds for state prisoners being housed in county jail. Maryville’s mayor, Tom Taylor, began the discussion by saying that Blount County’s seven mayors met on the situation last week and cited overcrowding in the jail with federal and state prisoners.

Taylor told the other mayors, meeting in the East Tennessee Foundation offices on Summit Drive,  that the state only pays $38 per day in upkeep for state prisoners  and the federal government pays $80 per day and only federal funds are received for medical care.

He said the counties have little input to the state and when he applied for relief from the state during the budget surplus he had no response.

Ed Mitchell, Mayor of Blount County, said the state has promised to increase the funding for state prisoners by one dollar each per year and $6 over the next six years. But he explained the program hasn’t kicked in yet.

“They’ve turned the county jails into state prisons,” he said, adding that an effort to resolve the problem “starts right here.”

Ron Woody, Roane County Executive, told the meeting that the state funding “is killing us.” He said that they should push the state to up the funding and pay medical for the prisoners.

Wood said that for  prisoners held on state charges no funds are received until a conviction is given, meaning a state prisoner could stay in county jails for months with no state funding.

Mitchell responded by also blaming longer and longer sentences for prisoners, adding that many prisoners don’t have the money to pay fines or court costs and must remain in jail.

“They just sit there,” said Larry Waters, Mayor of Sevier County, adding that 75 percent of the prisoners there are in for prescription drug offenses.

“In the legislature no one is looking at how it affects us locally,” said Knox County Mayor Tim Burchett. He said the cost of drugs for prisoners and the upcoming loss of the state Hall Tax could result in a county property tax.

“When they put them in our care they come off of Tenncare,” Burchett said, adding an extra burden. He also said that having to have two deputies to take mentally ill prisoners to Middle Tennessee is an expense as well.

“This caucus is the best place to start,” Taylor said.

Mayor Mitchell said his county is considering a lawsuit against the state.

Woody suggesting “crafting” something the state legislature could consider for a vote. If so there was a discussion on doing that before September and having it ready for the legislature.

Knoxville Mayor Madeline Rogero set the caucus meeting for Cherokee Farms where  the discussion will be about prescription drug abuse.