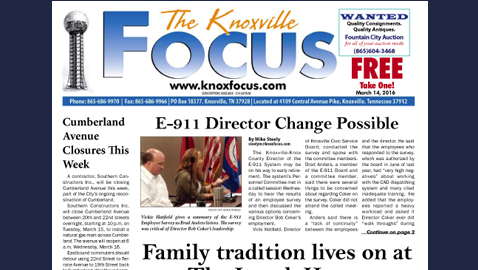 The Knoxville-Knox County Director of the E-911 System may be on his way to early retirement. The system’s Personnel Committee met in a called session Wednesday to hear the results of an employee survey and then discussed the various options concerning Director Bob Coker’s employment.

Vicki Hatfield, Director of Knoxville Civic Service Board, conducted the survey and spoke with the committee members. Brad Anders, a member of the E-911 Board and a committee member, said there were several things to be concerned about regarding Coker on the survey. Coker did not attend the called meeting.

Anders said there is a “lack of continuity” between the employees and the director. He said that the employees who responded to the survey, which was authorized by the board in June of last year, had “very high negatives” about working with the CAD dispatching system and many cited inadequate training.  He added that the employees reported a heavy workload and asked if Director Coker ever did “walk throughs” during the various shifts at the emergency response dispatching location.

Hatfield said the multi-page survey was by 57% of the employees and that employees not only answered printed questions but could also make remarks outside of the questions. She said that normally surveys “don’t get many” remarks but said there was a volume of comments from the employees, often on a number of extra pages.

City Fire Chief Stan Sharp chaired the special meeting and, with a vote of the committee, agreed to “sit down” with Director Coker and E-911 Attorney Don Howell to get the director’s response to the survey.

Anders said that he would like to e-mail his questions to Chief Sharp prior to the meeting with Coker.

Howell also advised the committee on three options that they could take if they choose to dismiss Coker, who is under contract until July, 2017. The director has been with the system 10 years and his contract calls for an automatic renewal agreement every two years.

Dismissing Coker would require the E-911 Board to vote with at least 50% plus one vote. Coker came under criticism during his review last year and the board voted then not to give him an annual raise.

The E-911 Board will meet again in regular session April 20th and may face a decision on the employment of the director and will likely also discuss the emergency radio system and how to proceed with replacing that outdated local system.