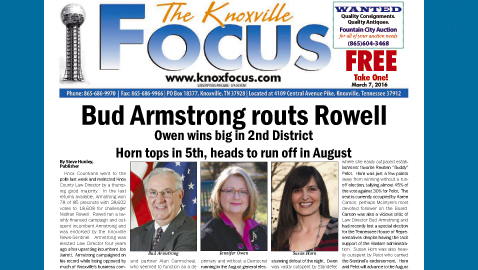 Owen wins big in 2nd District
Horn tops in 5th, heads to run off in August

Knox Countians went to the polls last week and reelected Knox County Law Director by a thumping good majority.  In the last returns available, Armstrong won 78 of 85 precincts with 28,602 votes to 18,608 for challenger Nathan Rowell.  Rowell ran a lavishly financed campaign and outspent incumbent Armstrong and was endorsed by the Knoxville News-Sentinel.  Armstrong was elected Law Director four years ago after upsetting incumbent Joe Jarrett.  Armstrong campaigned on his record while being opposed by much of Knoxville’s business community and the establishment who blamed him for Superintendent of Schools Jim McIntyre’s fall.  Much of the ruling class deeply resented Armstrong’s refusal to provide favorable legal opinions on demand.

Election Night was most notable for the establishment taking a beating.  Prominent among Rowell’s supporters was high-powered public relations maven and lobbyist Cynthia Moxley and her husband and partner Alan Carmicheal, who seemed to function as a de facto PR firm for the Rowell campaign.  Board of Education member Karen Carson gave a hefty donation to Rowell’s campaign and while Rowell attended toney gatherings in West Knoxville, Bud Armstrong was out seeing the people all over the county. It came as no surprise that Armstrong’s victory was uniform all across the county after campaigning as “The People’s Lawyer.”  Both candidates ran in the Republican primary and without a Democrat running in the August general election, the GOP nod is tantamount to election.

Armstrong had been severely criticized by those Board of Education members closely tied to outgoing Superintendent of Schools Dr. Jim McIntyre including Carson, Lynne Fugate and Tracie Sanger.  The McIntyre clique also took a beating on election night with retired educator Jennifer Owen drubbing Grant Standefer in the most stunning defeat of the night.  Owen was vastly outspent by Standefer, who was also endorsed by the Sentinel.  Jennifer Owen ran a classic grassroots campaign to win with almost 66% of the vote.  Owen won the early voting by a two-to-one margin and carried every precinct on Election Day.  Standefer was perceived as the candidate most closely aligned with the McIntyre faction.  Newcomer Susan Horn led all candidates for school board in the sprawling Fifth District where she easily outpaced establishment favorite Reuben “Buddy” Pelot.  Horn was just a few points away from winning without a run-off election, tallying almost 45% of the vote against 30% for Pelot.  The seat is currently occupied by Karen Carson, perhaps McIntyre’s most devoted follower on the Board.  Carson was also a vicious critic of Law Director Bud Armstrong and had recently lost a special election for the Tennessee House of Representatives despite having the tacit support of the Haslam administration.  Susan Horn was also heavily outspent by Pelot who carried the Sentinel’s endorsement.  Horn and Pelot will advance to the August general election for a final showdown.

Former Knox County Commissioner Tony Norman was unopposed in the Third District, winning 5,802 votes.  Known for his gentlemanly demeanor and having served as Chairman of the Knox County Commission, Norman’s election was yet another blow to the establishment.  Norman has been a critic of Superintendent Jim McIntyre and will replace current Board of Education Chair Doug Harris in September.  Harris has been largely supportive of McIntyre.

Former Knox County Property Assessor John Whitehead made an apparent comeback barely edging out Jim Weaver, the favorite of current Assessor Phil Ballard in the closest election of the night.  Whitehead won by 70 votes in spite of the fact Weaver ran a well-financed campaign and enjoyed the endorsement of the Knoxville News-Sentinel as well.

One of the few bright spots of the evening for the establishment was the nomination of newcomer Hugh Nystrom in the Fourth Commission District.  Nystrom defeated Janet Testerman and incumbent Commissioner Jeff Ownby.  Evelyn Gill upset Rick Staples to win the Democratic nomination and will face Michael Covington in the general election.  Gill will be a heavy favorite to win in August.  Carson Dailey, long active in South Knoxville, was unopposed for the Republican nomination and will face off with James “Brandon” Hamilton in August.  Dailey is seen as the favorite with deep roots in the district and wide support.

Dave Wright, Chairman of the Knox County Commission, was also unopposed for the GOP nomination and will move to the August general election where he faces a challenge from an independent candidate.  Michele Carringer won the GOP nod over former school board member John Fugate to run against Laura Kildare in the Second District to replace Amy Broyles.